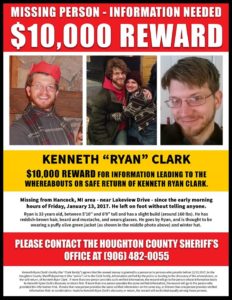 The family of 33-year-old Kenneth Ryan Clark is now offering a $10,000 reward for information leading to his whereabouts or safe return.

The Hancock man was last seen the evening of January 12th when he mysteriously left his parents’ house he was staying at on foot.

He had neither his phone nor his wallet.

His trail ended cold on US 41 near the Portage Lake Lift Bridge.

Ryan’s mother Marilyn Clark said, “I am going to thank the community because leads keep coming in. Unfortunately, none of them have led to Ryan’s location. I’m an individual that likes to see action and so it was actually easier in the beginning when we had leads to follow up and things to organize, etc. It’s getting harder now.”

To try and generate more leads, the family raised the money through a crowdfunding site and they are asking people to go to their Facebook page–Search for Ryan Clark–and share the news about the reward.

Clark said, “We really are thinking at this point that he may be out of the area, so if you have friends that you can pass the Facebook page around, that would be really valuable. That whole social network now, to have more eyes on this, is the most important thing for us.”

Anyone with any information should contact the Houghton County Sheriff’s Office at (906) 482-0055.

Hancock Has a New Chief of Police

Holiday Hoopla Returns to the Bonfire in Houghton

The Houghton City Council is expected to face a light agenda at tonight’s meeting. One …