A longstanding tradition returned Saturday evening, as American Legion Post 90 in Lake Linden held its annual fundraiser for the UP Honor Flight organization. Under normal circumstances, there is a large raffle and other revenue generating activities involved, all hosted by the Sons of the American Legion. With COVID-19, this year’s dinner was scaled back, put on by post members, but still very successful.

Dan Judnich says that he was impressed by the turnout, saying that preliminary tallies put the number of diners at well over two-hundred. The hearty meals of spaghetti and chicken, along with a roll and dessert, cost 13 dollars per plate. Judnich says it made for a long day for the volunteers.

Previous years have seen as much as $10,000 raised for UP Honor Flights, and the checks are proudly displayed on the wall of the restaurant section of the Lakes Lounge at the corner of Front and Fourth Streets.

In October there will be a lasagna dinner fundraiser, as well as the annual steak stag. That has already sold out, which is customary. In November, there is a “does” dinner for hunting widows during rifle season. 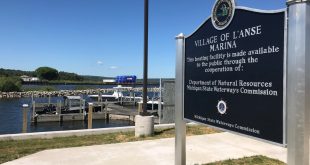