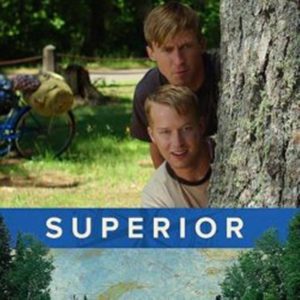 The March installment of the Nordic Film Series at Finlandia University’s Finnish American Heritage Center will feature some familiar faces, and some familiar scenery.

“Superior” will be shown at 2 and 6 p.m. on Thursday, March 9 at the FAHC. Shot on location in the Copper Country in 2014, the award-winning film – which is based on a true story – follows Charlie, who is on his way to Michigan Technological University, and Derek, who is counting the days to his inevitable military draft eligibility.

Before their futures take hold, the lifelong best friends embark on one final adventure: a 1,300-mile bike ride along the shores of Lake Superior. Charlie and Derek pedal through the northern backwoods of Michigan, Minnesota and Canada. Along the way they face hunger, exhaustion and the kind of people in the world who never wanted to be found.

Several local actors appear in the film, which is entirely in English and is about 90 minutes long.  The showings are free and open to the public; donations to support the film series are appreciated.
For more information about this film screening, call (906) 487-7549.