Task Force Formed To Prepare For CWD In U.P. Deer

With the potential threat of chronic wasting disease spreading to the Upper Peninsula from across the Wisconsin border, or by other means, the Michigan Department of Natural Resources, hunter groups and others are working cooperatively to try to protect the region’s deer population and valuable hunting tradition.

Chronic wasting disease is an infectious sickness in deer, elk and moose that causes neurological degeneration in parts

of an infected animal’s brain and a slow wasting away, ending in death.

“Should chronic wasting disease become established in the Upper Peninsula’s wild deer population, the deer herd and deer hunting could be negatively affected for decades to come,” said Terry Minzey, DNR Upper Peninsula wildlife supervisor. “This isn’t as much about whether we will have deer to hunt, as it is about whether years from now our children and our grandchildren will have any deer to hunt.”

In the U.S., chronic wasting disease was discovered in Colorado in 1967 mule deer and eventually spread to roughly two dozen states, including Wisconsin and Minnesota. Wyoming’s deer herds have been most severely impacted.

“It was clear a lot of folks had a lot of questions about CWD, didn’t know that we had a response plan in place and what measures would be required, should the plan need to be implemented,” said Stacy Welling Haughey, DNR Upper Peninsula coordinator. “Hunters wanted to know how they could help us get the word out about the disease.”

Resource professionals from the DNR, including wildlife and executive division personnel, have been involved in these discussions. 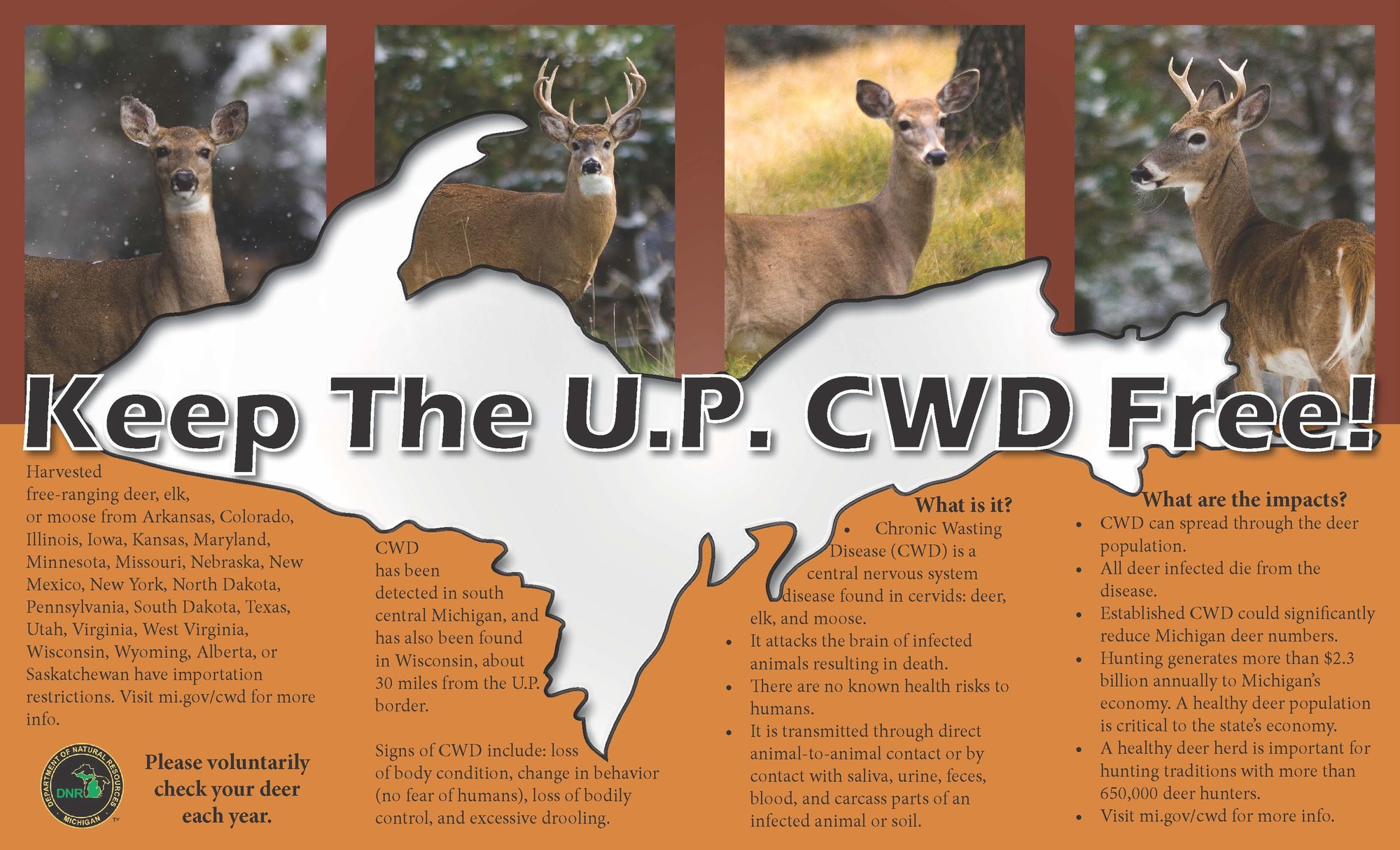 “We have had three very proactive, informative and productive meetings,” said Richardson, who is the task force chairman. “The goal was to review the current rules and recommendations for the Lower and Upper Peninsulas along with the surrounding states and out west. After such review, we would see if we wanted to recommend any changes to the current action plans. We wanted to do this before CWD potentially hits the U.P.”

By April 1, the task force hopes to reach a consensus recommendation on U.P. CWD response plan policy to forward to the DNR and NRC for consideration.

The DNR first began its development of plans to combat CWD in Michigan about 15 years ago.

In April 2015, wildlife officials with the DNR were alerted to the presence of a white-tailed deer in Ingham County, exhibiting physical signs of CWD, which is always fatal to inflicted deer.

The 6-year-old female deer was shot and killed as part of an ongoing targeted disease surveillance effort.

The deer carcass was sent to the DNR’s Disease Laboratory in East Lansing, where in collaboration with Michigan State University’s Diagnostic Center for Population and Animal Health, the deer was examined and determined to be suspected positive for CWD.

That diagnosis was confirmed within weeks by the National Veterinary Services Laboratory in Ames, Iowa. The incident marked the first-known instance of CWD being confirmed in a free-ranging (wild) deer in Michigan – a milestone that sent a chill through hunters across the state. 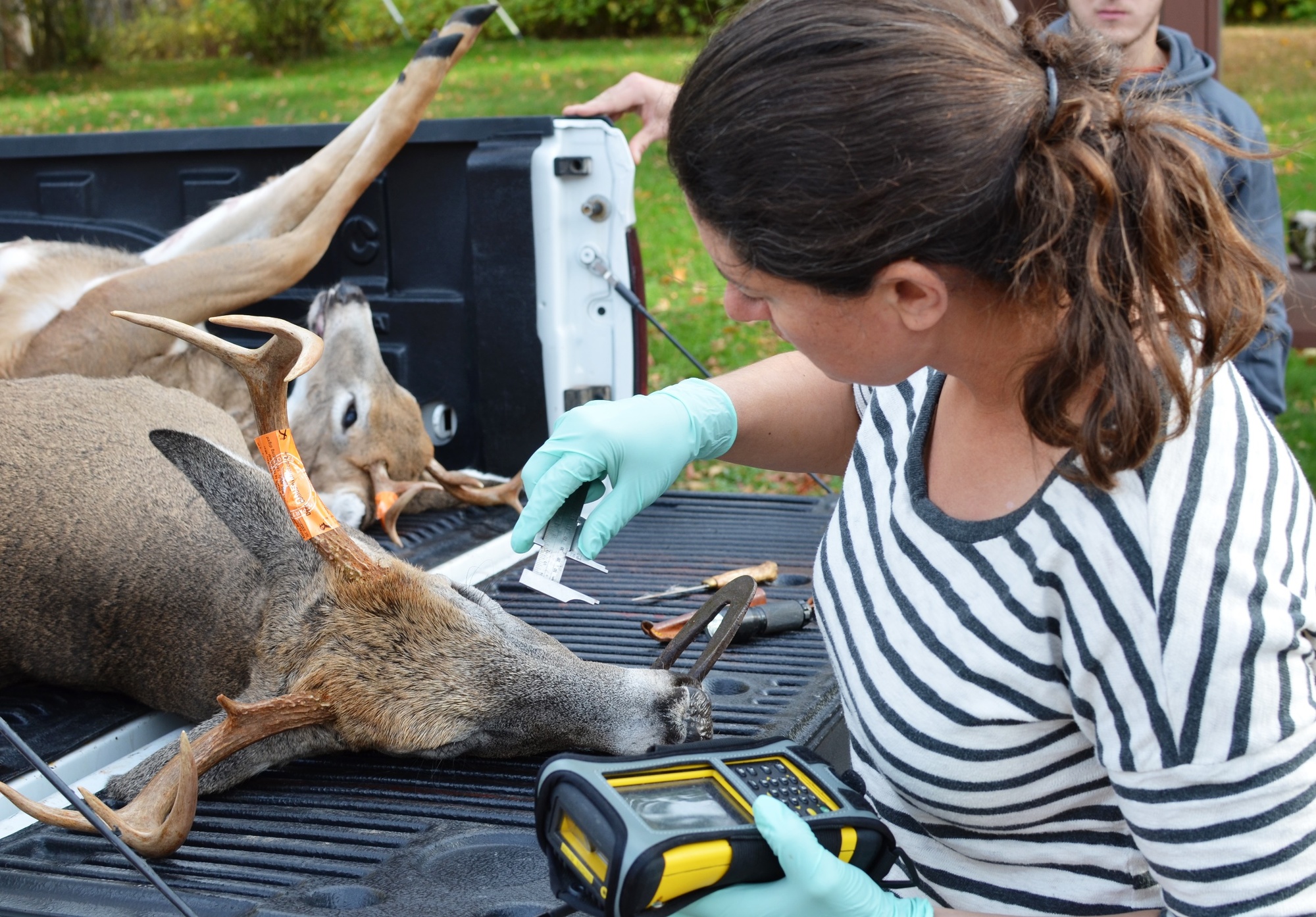 Michigan had first found CWD in captive deer in 2008, when a privately owned cervid (mammals of the deer family Cervidae) facility in Kent County was confirmed to have a CWD-positive deer.

But with the disease – which is transmitted through animal-to-animal contact or through a contaminated environment – then found for the first time in a free-ranging Michigan deer, concerns were heightened about its possible spread.

In 2002, the DNR and the Michigan Department of Agriculture and Rural Development crafted the Michigan Surveillance and Response Plan for Chronic Wasting Disease in Free-ranging Deer and Privately-Owned Facilities, which directed several steps to be taken once an infected deer is located.

Provisions of the surveillance and response plan, which was updated in 2012, include:

Under Michigan’s CWD response plan, similar provisions would be put in place should a CWD-infected deer be found within 10 miles of the Michigan-Wisconsin border.

In Wisconsin, CWD was first discovered in wild deer in 2002, with the disease already likely widespread there at that time. Today, there are more than 40 counties affected in Wisconsin – with feeding and baiting bans in place.

The closest positive wild deer to the U.P. has been found in Portage County, about 175 miles from Michigan. Oconto and Oneida counties, each roughly 35 miles from the U.P., have deer tested positive for CWD in captive deer facilities.

So far, CWD has not been found in the U.P.

“It may already be here, but hasn’t been detected yet,” Minzey said. “However, we have found nothing in the numerous road-killed, crop damage kill-permitted deer and others harvested by hunters we’ve tested at the disease lab from the region.”

Since May 2015, CWD has been confirmed in nine free-ranging Michigan deer – all in the Lower Peninsula – from within a 17-township CWD Core Area, covering portions of Ingham, Eaton, Clinton and Shiawassee counties.

So far, more than 7,800 deer have been tested for CWD from the core area, 2,600 from the associated five-county CWD Management Zone and 1,917 from the remainder of the state, including 619 from the U.P.

In fall 2015, DNR staff launched an education and outreach campaign in the Upper Peninsula to inform hunters and the general public about chronic wasting disease and its devastating impacts.

“Our ongoing campaign to ‘Keep the U.P. CWD Free’ has used billboards, bumper stickers, information flyers, media outreach and communication by, and among, hunter groups to help get the message out,” said John Pepin, DNR deputy public information officer. “One of the main messages has been trying to stop hunters from bringing deer and other game shot in CWD-infected states or Canadian provinces back to Michigan, where it could become the source of a new outbreak of the disease.”

Hunter groups in the U.P. have put a lot of work, interest and funding into the effort, creating their own radio spots  (U.P. Whitetails Association) disseminating information and paying for educational materials.

“They have done a fantastic job and have made some significant contributions,” Haughey said. 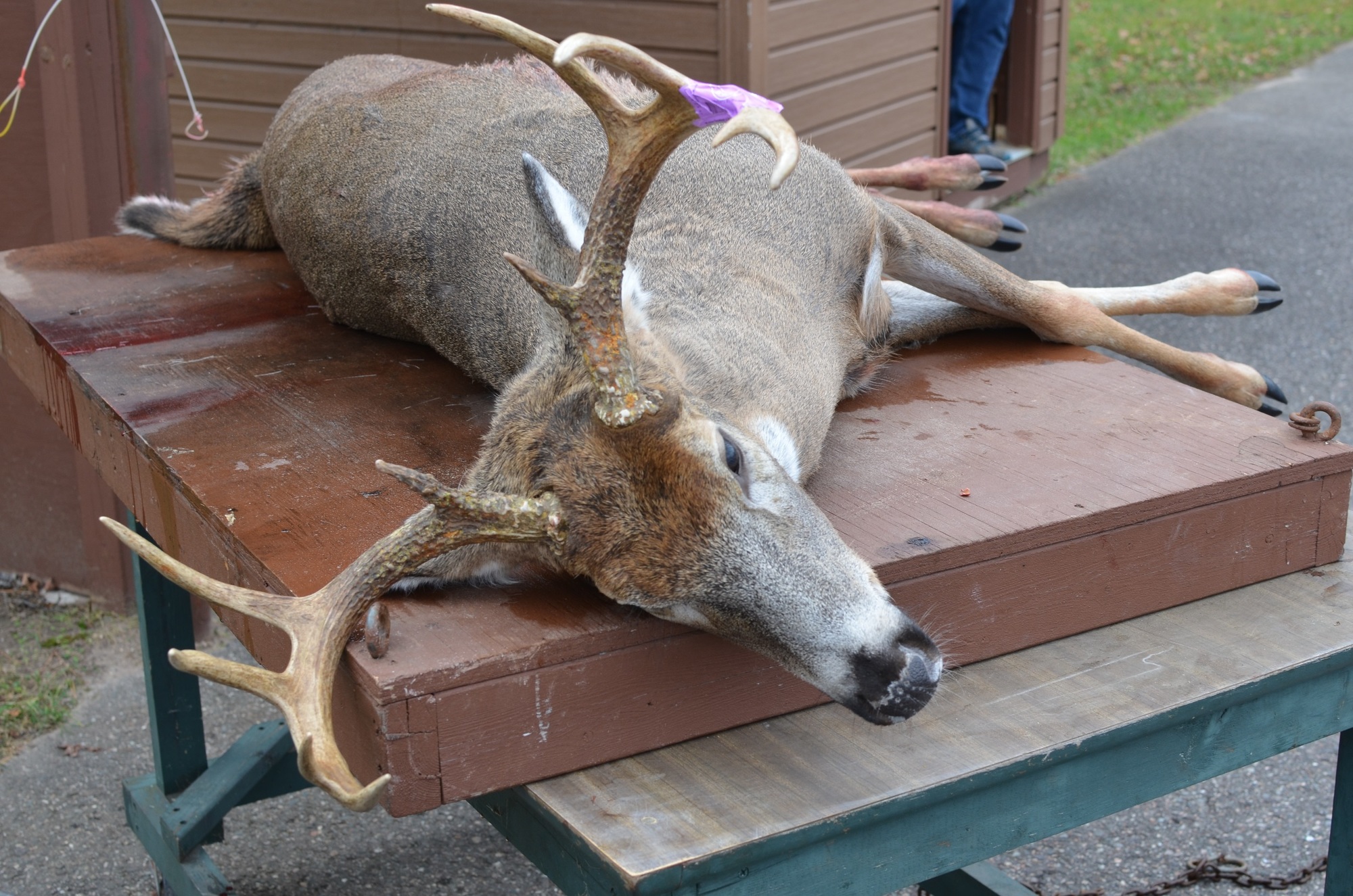 The U.P. CWD Task Force is exploring additional means for disseminating information to hunters and the general public about CWD risks to deer populations, restrictive state actions that would be necessary should the deadly disease be found in the U.P., and precautions advised for hunters, taxidermists and others.

George Lindquist, a statewide vice president for Michigan United Conservation Clubs and member of the task force, said he thinks it is a key objective that hunters learn the CWD facts and help to educate each other.

“I think it’s really important to educate the people of the Upper Peninsula on this,” Lindquist said. “We really need to let people know about not bringing their deer back from other states, and if we get this (disease) here what that will mean and what the consequences are.”

Get more information on chronic wasting disease, Michigan’s efforts to combat it and more at www.mi.gov/cwd.

Check out previous Showcasing the DNR stories and subscribe to upcoming articles.

Hancock’s extensive new zoning ordinance is officially on the books. After hearing from more than …