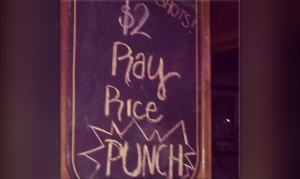 A Marquette bar is apologizing for offering a drink special Saturday night called “Ray Rice Punch.” Wild Rover General Manager Lorne Washburn blames the idea on an employee, and says it was not approved by owners or managers. He says the matter is being dealt with internally. Ray Rice is the Baltimore Ravens running back who has been suspended after video of him punching and apparently knocking out his fiancee in an elevator was made public.

MTU Trustees to Meet This Morning

Today is Plaidurday, the day when Yoopers celebrate the pattern which, although it doesn’t make …