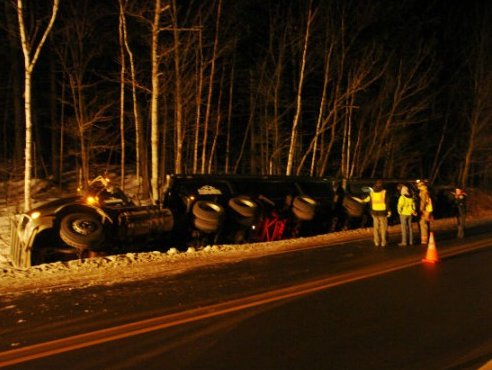 The southbound semi overturned off the right side of County Road 550, about two miles north of the Sugarloaf Mountain public parking lot. Sheriff’s deputies and other first responders were called around 3:20 a.m. The driver was 30-year-old Shawn Mocker of Marquette. He was not injured. State Police troopers from the Negaunee post say Mocker told them he swerved to avoid a deer. Mocker was ticketed for driving too fast for conditions. The truck is owned by by M.J. VanDamme, Inc., a contractor used by the Eagle Mine.

Traffic was delayed intermittently through the day, as operators using heavy equipment tried to remove the semi and its two trailers. Troopers say only small amounts of ore spilled from the trailers.

This year’s harvest during the firearm deer hunting season has passed a quarter-million. With hunters …