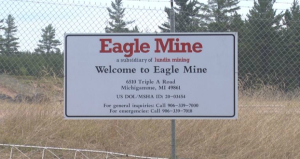 Groundwater monitoring will be increased at the Eagle Mine in Marquette County, under an agreement reached last week between the State of Michigan and Lundin Mining. Among the changes…
– Water being returned to the environment will now be sampled before being treated by the facility’s reverse osmosis system, as well as after treatment.
– Steps will be taken to address elevated vanadium concentrations in a couple of monitoring wells. The Michigan Department of Environmental Quality said the vanadium levels are still significantly below the groundwater standard. The DEQ also noted that there is no vanadium in the discharge water from the mine. Naturally-occurring vanadium has been noted in subterranean aquifers at the site.
– Some effluent testing which has been done on a monthly basis will now take place each week.

The DEQ says the revisions to the groundwater discharge permit were made following public comments received both in writing, and at a public hearing a year ago. You can see all the documentation related to the permit, including the latest report, here. Environmental monitoring results are independently reviewed by the Superior Watershed Partnership, and are available here.

Share
Previous “Plan B” for Road Improvements?
Next Wisconsin Mine Plan Abandoned