Stories that the Calumet Theater is haunted go back more the 50 years.

The most famous of the resident haunts is Polish actress Madame Helena Modjeska, who died in April 1909, only a few years after the theater opened.

The famous Shakespearean actress performed there three times in the theater’s first decade.

The Calumet Theater is hosting a fundraiser gala this Saturday, which will celebrate the long association of Madame Modjeska and the reported sightings of her ghost.

Executive Director of the theater Laura Miller said, “We developed our haunted reputation in 1958 when actress Addyse Lane lost a line talking about “Taming of the Shrew”, and she saw the spirit of Madame Modjeska come to her from the first balcony and mouth the words to her. Since 1958, there have been several different people that have claimed to see the spirit of Madame Modjeska.”

Said to be one of the most haunted locations in the Copper Country, Madame Modjeska may not be alone in the halls of the Calumet Theater.

Miller said, “We always hear different things from our technical directors. Myself, I’ve experienced a few things. Janitorial people, that have been in and out, you have a lot of unexplained music that comes from different locations that’s unexplainable, you’ve got a lot of cold breezes that just hover around you from time to time, a lot of door handles that are locked and people are trying to get in and nobody on the other side.” 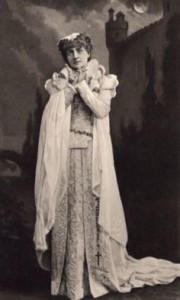 The evening will include a dinner and a silent auction along with a presentation featuring the first person who claimed to see Modjeska’s ghost.

There will also be ballroom dancers in period dress.

Tickets for the event should be purchased by Thursday.

Will Madame Modjeska make an appearance? Those attending will be the first to find out.

Here is the full press release from the Calumet Theater:

This year’s Calumet Theatre Gala celebrates Madame Helena Modjeska’s long association with the theatre, which includes sightings of her ghost.

The evening begins at 5:30 with a social hour and silent auction featuring gourmet appetizers with wine. This will be followed by a dinner prepared by the Irish Times Restaurant. After dinner there will be a presentation in the Theatre on Madame Modjeska – her life, her roles, with slides and interviews with a distant relative of Modjeska and former actress Addyse Lane.

Dancers in period dress will begin the ballroom dancing with a waltz followed by music and dancing. The silent auction

The Gala is one of two significant annual fundraisers for the Calumet Theatre.

Tickets for the event are $75.00 per person, with couple and table discounts available. Reserve by calling 337-2166 Monday through Friday between noon and 5:00, or stop at the box office at 340 Sixth Street, Calumet.

For decades there have been stories of paranormal activities at the Calumet Theatre. The stories are told by technical directors, sound company technicians, drama club teachers, janitors, executive directors and others. They include hearing tunes being whistled with no source found as well as hearing music playing inside walls, sightings of figures in the second balcony and on the stage, rattling of door handles on locked doors, feeling unexplained cold breezes, and other unexplainable noises. In recent years, several professional paranormal teams have conducted investigations at the Theatre. Based on data acquired from their scientific equipment, paranormal activity has been confirmed.

The Calumet Theatre first gained its haunted reputation in 1958. On July 22, 1958, actress Addyse Lane was performing as Kate in Shakespeare’s Taming of the Shrew. During her soliloquy in Act V, Scene 2, she lost a line. While ad-libbing, Lane saw a bright light from the balcony come toward her. Madame Modjeska’s hand reached out to Lane’s hand and the missing word was spoken to her. After the show, Ms. Lane swore that Madame Helena Modjeska appeared to her, helping her recover from the miscue of her speech. Since then strange and inexplicable occurrences have been reported at the Calumet Theatre.

Modjeska’s apparition has been seen throughout the Theatre many times over the last five decades. Known as the greatest Polish actress of all time, Madame Helena Modjeska became known in America in the 1880s through 1905 as the most distinguished Shakespearean actress of her day. She performed at the Calumet Theatre in MacBeth in 1900, in Henry the VIII in 1902, and in Mary Stuart in 1905.

String of Burglaries Under Investigation

One of two snowmobile accidents yesterday in Schoolcraft County was fatal. Yesterday a little before  …