In the Baraga District, which also had two seats available, Doreen Blaker led all candidates with 392 votes. Incumbent Robert “RD” Curtis was returned to office with 259 votes. Former Council members Elizabeth “Popcorn” Mayo and Fred Dakota fell short, with 237 and 226 votes, respectively. The other Baraga District incumbent, Carole LaPointe, was eliminated in the primary election in November.

Tribal voters said “no” to two referendums that would have paved the way for the construction of a new bayside casino. By a 302-261 vote margin, they rejected a plan to purchase the Baraga Lakeside Inn. A proposal to spend more than 31-million dollars to renovate the Inn and build a new casino on the property lost by a 333-229 margin. Tribal members had approved a similar proposal to purchase the hotel earlier this year, but the deal couldn’t be closed before a bank foreclosed on the property. The earlier vote was criticized by opponents of the proposal, because it was held in a public forum.

KBIC voters approved two other proposals. By a 302-261 vote, they supported the issuance of marriage licenses to same-sex couples. A proposal to allow the KBIC to produce and sell marijuana to Tribal members age 21 and older, and to make it legal for members 21 and older to possess marijuana for personal use, passed by a 298-267 vote. Tribal leaders have acknowledged that both of those proposals conflict with state and federal laws, and that they may not be able to implement them. 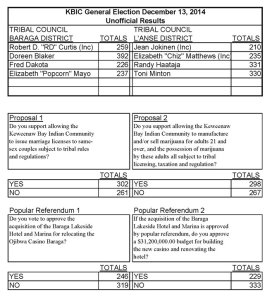 Run or Bike Around the Keweenaw This Memorial Day Weekend

After two years off because of the COVID-19 pandemic, Baraga County kids will have a …