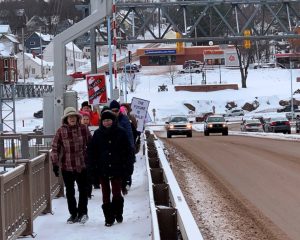 After three years of marching, those who took part in Saturday’s Sister March say the message remains the same—equality.

The 3rd annual event was held once again in conjunction with the national Women’s’ March, with similar Sister Marches held across the country.  A group of about 80 people—men and women—gathered at BridgeView park with their signs and walked across the Portage Lake Lift Bridge. 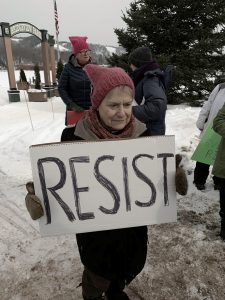 Organizer Susan Burack said the first march was made in protest of the inauguration of President Trump and they have even more to protest now.  “It’s important that we make a statement in our community and it’s wonderful that we have the bridge because we’re about building bridges, not walls. This is an inclusive march. We welcome everybody who supports women’s rights,” said Burack.

Among the reasons for marching, Burack says they are fighting against discrimination and for a woman’s right to choose, as well as supporting those in the #MeToo movement.

Two of the participants, Rene Johnson and Carolyn Peterson, had previously attended the inaugural Women’s March in Washington DC in 2016. 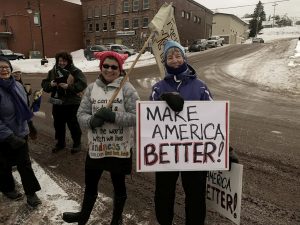 Johnson says she will continue to march as long as her legs allow her to.  “Because there is a unique power when a group of women get together that has to be shared with the rest of the world so I want to be part of that powerful movement,” said Johnson.

Peterson said the march is not anti-man as some have characterized it, but shows that everyone can come together.  “I have never seen this country as energized as it is right now and the positive energy—love has to cast out fear and hate and that’s what we’re doing,” she said.

Though the national movement has become somewhat muddled in controversy, the motivation for marching has not changed for these women of the Copper Country.

Johnson says the purpose of the march is all about positivity for change and not about complaining and contributing to negativity.  “It’s about caring for everybody and finding ways to do that so that’s why I’m continuing to be a part of it because I believe that anytime you participate in that kind of energy, the energy grows and it spreads and that’s what we need to do,” said Johnson.