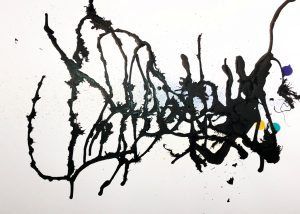 Ross Chaney (b. 1972, Tulsa, Oklahoma, USA) lives and works in Santa Fe, New Mexico. Raquel Alvizures (b. 1973, Mataquescuintla, Jalapa, Guatemala) lives and works in Guatemala City, Guatemala. The exhibition of their work is curated by Lisa Gordillo, Assistant Professor, Department of Visual and Performing Arts at Michigan Tech. Gordillo was attracted to the way each artist uses color, texture, and line to express ties to their cultures and to the stories that shaped them. Gordillo also felt that the stories each artist draws from for inspiration are particularly important to share with our region. “Their work makes a very strong pairing,” she says. “It’s my hope that this exhibit will result in many good conversations.”

Mr. Cheney is an accomplished visual artist, with works of art in the collection of the Museum of Contemporary Native Art in Santa Fe, NM. His works are influenced by time in Asia and by his Asian and Native American (Osage) ancestry. The exhibit showcases his recent works on paper and canvas with Sumi ink and acrylics. The works are mostly non-objective; their free and fluid use of color and texture recall geographical maps and the policies of westward expansion through manifest destiny which influenced his circumstances growing up.

Chaney’s free and liberal use of color is reminiscent of the beadwork Ross grew up seeing on the Osage reservation in Oklahoma. The colors, often polar opposites compete with each-other creating clashes of conflict on the canvas. The heart of the artwork deals with issues and ideas about the human capacity for empathy and Ross’s belief that empathy and healthy boundaries is key to humans’ connection with society, and the world at large. 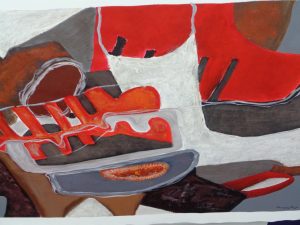 Ms. Alvizures lives and works in Guatemala City, Guatemala. She grew up in rural Mataquescuintla, in the outskirts of an agricultural town. Her geometrically abstract and patterned paintings aim to express the vibrancy and mystery of the stories of her culture.

Guatemalan critic Juan B. Juárez writes, “through her elemental, magical and vital forms … one can glimpse fleeting fragments of mythical stories and narratives that … bring to reality the mysterious dimension of the sacred: embryonic forms wrapped in colors of earth, sky and fire that remind us of prehistoric rock art, as well as of certain works by Carlos Mérida and other modern and contemporary artists … (Alvizures) creates the first signs of an order that, like a magic spell, makes its way against the primordial chaos and darkness. ”

The artists’ visit is supported in part by the Michigan Tech Visiting Women and Minority Lecture Series, which is funded by a grant to the Office of Institutional Equity and Inclusion from the State of Michigan’s King-Chavez-Parks Initiative. Both artists will spend time with the community during their visit. Ms. Alvizures will use part of her time on campus to create a mural for the Rozsa Center. The public is welcome to visit with the artist between March 5-9 in the North Mezzanine of the Rozsa Lobby, as she paints the mural.