Students across the globe are trying their hand at computer programming.  In recognition of National Computer Science Education Week, schools are participating in an educational event called the “Hour of Code,” where each student is introduced to the idea of making digital commands and observing an immediate response. 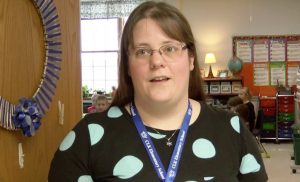 In the Copper Country, CLK Elementary and Washington Middle School are both taking part.  “They live in a digitally rich world and we have to get them ready for jobs that actually don’t even exist today. So we’re trying to make sure that in today’s digital world that they have the tools they need to go forward in what they choose to do later on,” said CLK Schools 3rd grade teacher Stacy Lancour.

As the world around us becomes more and more dependent on technology, our children are far more advanced than in generations past.  Lancour said, “This year we’ve been participating in a lot of coding activities and today with Hour of Code, they learned about how you can take certain steps and loop them or repeat them over and over again, so you can simplify your coding, which means you’re going to make less mistakes and be more efficient.”

CLK Schools has had a strong computer science department for quite sometime, and this week’s activities broaden that horizon to children as young as kindergarten age.  “All of my students are fully engaged right now. They’re having so much fun and they’re experiencing something they’ve never done before,” said 4th grade teacher Heather Hainault.

The idea is that computers are everywhere and operate just about everything, so in order to take control of that digital platform, one has to understand it and speak its language.  That’s essentially what this kindergarten class is doing by placing arrow cards on this game board. The student tells this mouse where to go to find a piece of cheese, by pressing those symbolic commands into its program log, and if done correctly… we have a happy mouse.

Hainault said, “It’s basically giving the students a chance to learn what coding is and that they don’t have to scared of it. It’s not hard and that you can do it even using three different colored markers.”

Students will use this information in the future and these exercises serve as the first steps to digging deeper into the cyber programming world.  “They can use coding in many different science positions and if they wanted to pursue something in computer science, they could possibly be programming their own robot someday in a field of computer science on their own,” said Hainault.

Share
Previous Your Stormy Kromer Is The “Coolest Thing Made In Michigan”
Next Obituary: Matthew J. Banovetz