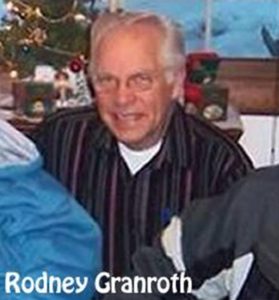 An avid outdoorsman, the Dollar Bay man disappeared while hunting on his family’s property in Tapiola last Thursday.

His wife of 51 years describes what these last several days have been like.

After searching some 1,500 acres over the weekend, search and rescue teams began to comb the area again Tuesday.

Michigan Backcountry Search & Rescue’s Michael Neiger said, “The (Houghton County) Sheriff’s Department has arranged for a Coast Guard helicopter to come in and Superior Search and Rescue is going to be on scene doing some work with the Coast Guard. I’m going to be doing some tracking, looking for wolves, coyotes and fox—working their tracks to see if they lead us to any evidence that’s relevant to the Sheriff’s investigation.”

If the teams are still unsuccessful after Wednesday, a pair of bloodhounds will be brought up from downstate on Friday to try and locate Rodney Granroth and bring closure for his family.

Faye Granroth said, “I’d like to thank them all—the fire department, the police, the search and rescues—Superior Search and Rescue—all of them. I can’t believe how kind and good and they’re just working so hard for one person.” 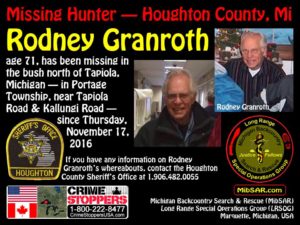