Over the past several weeks, Highland Copper Co. Inc. has been conducting exploration of copper minerals situated beneath the surface of a mile-square section of Porcupine Mountains Wilderness State Park, bisected by County Road 519.

The work is being done to see if a mineral deposit first explored here in the 1950’s might feasibly be mined, which would enlarge the company’s Copperwood Project beyond its currently-permitted boundaries.

Since March 17, work had been ongoing by Highland Copper’s Minnesota-based contractor, Idea Drilling, within a 466-foot road right-of-way (233 feet on each side of the road) owned by the Gogebic County Road Commission.

However, work was halted Tuesday evening after Highland Copper officials were informed of several potential erosion issues on the county property. Workers were part way into drilling their last test core sample.

“All drilling has been suspended indefinitely and the site is under remedial action; measures are being installed as we speak,” Dave Anderson, director of Environment, Stakeholder Relations and Michigan Corporate Affairs for Highland Copper said Wednesday. “That site will be off limits to any equipment for an indefinite period.”

Highland Copper is engaged in efforts and discussions with county and state regulators to address the situation.

Staff from the DEQ and the road commission had visited the work area Tuesday, where Highland Copper has been working on nine bore holes, with a tenth under consideration.

With rising temperatures in recent days, the frozen ground where the work was ongoing had begun to thaw quickly, producing mud and water.

“We observed erosion into a wetland and ditch leading to a tributary to Gipsy Creek,” said Steve Casey, DEQ Water Resources Division district coordinator. “Highland Copper will take immediate steps to stem erosion and they are developing a plan for stabilization of the site.”

Casey said that plan will be used to apply for a Soil Erosion and Sedimentation Control Permit (Part 91) from Gogebic County. 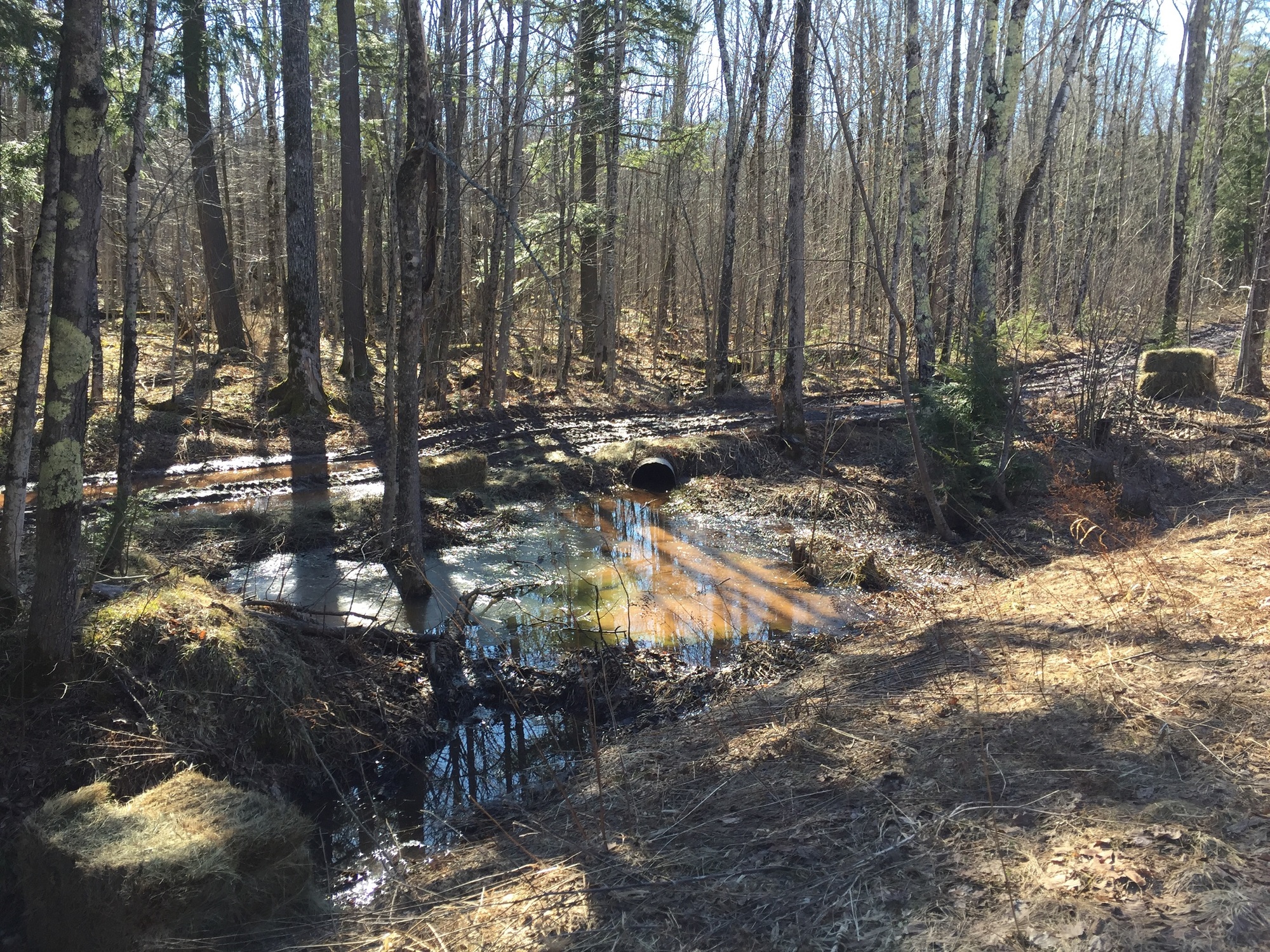 Highland Copper has employed Coleman Engineering Co., an Upper Peninsula firm, to produce the application and work on getting short- and long-term erosion control measures in place.

“DEQ staff will be further evaluating the site this week for possible wetland violations and assessing progress being made to control erosion,” Casey said.

Anderson inspected the site Wednesday, as drilling rigs were taken down and removed. Personnel were being sent off-site. Highland Copper has also ceased drilling on property it owns west of the state park.

Anderson said at some of the drill sites – about 100 feet off the blacktop – the soil is highly-disturbed, but there is no off-site migration of sediment or water.

At other locations, off the drill pad, or off the immediate drill road, there was liquefied sediment leaving the actual footprint area into either upland forested area or, in some cases, wetland forested area.

However, there was no uncontrolled sediment leaving any of those sites into a stream that goes into the park, Anderson said.

“Right now, they need to provide some temporary measures to contain erosion on their sites,” Pionk said.

Long-term, Highland Copper will take measures, including grading and re-seeding, to permanently restore the area to natural conditions – a condition of the company’s permit the road commission issued Feb. 10, allowing the exploration work.

Pionk is confident Highland Copper will be able to comply with all permit provisions.

“I believe they can handle the situation out there,” Pionk said. 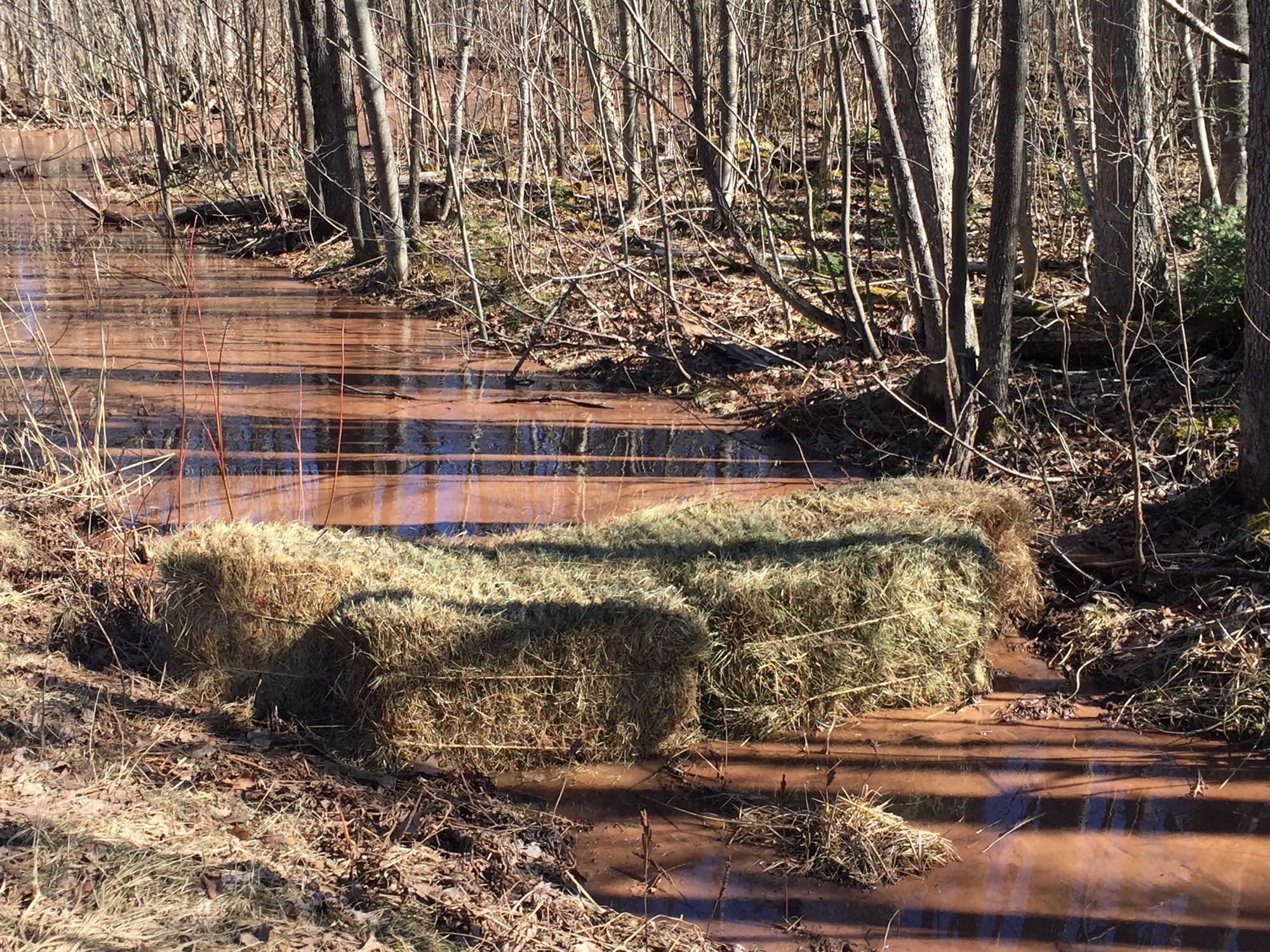 In addition to Highland Copper’s work on county land, and its own property, the company had also been drilling bore holes earlier this winter on state park land, situated west of County Road 519 (Section 5, T49N R45W, Wakefield Township).

On Jan. 31, the Michigan Department of Natural Resources issued a use permit to Highland Copper to access the minerals via 12 bore holes.

The State of Michigan owns the surface land on the property, but not the minerals below.

The mineral rights are leased from the Keweenaw Land Association by Copperwood Resources (formerly Orvana Resources U.S. Corp.) – a subsidiary of Highland Copper. Under state law, the owner of the minerals has a right to “reasonable” use of the surface to access their minerals.

Work began on state-managed park land Feb. 3. However, exploration there was suspended on Feb. 19, due to unseasonably warm late winter temperatures, after a fourth bore hole was completed.

“None of Highland Copper’s exploratory work has since been conducted on state park land,” said John Pepin, DNR deputy public information officer. “We visited the work area this week and, along with Highland Copper, confirmed no impacts to park land had occurred.”

“One of these restrictions, which resulted in Highland Copper’s park exploration being interrupted, stated that work only be conducted on frozen ground, ideally with a foot of snow cover,” Rich said.

If the exploration results indicate the potential for copper in suitable quality and minable quantities, Highland Copper would conduct a feasibility study, designed to mine the deposit entirely by underground methods, allowing the company to gain access to the copper ore body from land it owns outside the park.

Any potential mining of the minerals would require a separate regulatory process through the DEQ. Highland Copper would have to amend its existing permit.

“The DNR will ensure there would be opportunity for public review and comment before any mining would occur on minerals beneath Porcupine Mountains Wilderness State Park,” Pepin said.

In addition to the previous drilling to the mineral deposit in the 1950’s, this small section of land in the westernmost part of the state park was previously logged, and a railway line was installed in the 1930s.