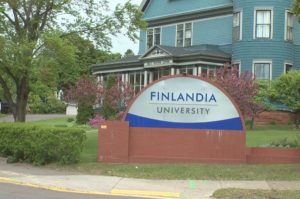 Five students from Finlandia University have been dismissed by the school.

In an email sent to students and staff, Finlandia President Philip Johnson indicated the students in question were contributing to an escalating hostile climate.

The email says that climate was characterized by student-to-student threats, intimidation and retaliation.

The students were removed from campus by safety and security officials.

Details surrounding the violations were not released by the university, nor were the identities of the students involved.

Here is the email from President Johnson in its entirety, released by Finlandia University’s Marketing & Communications Department:

I want to inform you of disciplinary actions taken yesterday that impacted our campus.  We acted to immediately dismiss five students from campus for contributing to a quickly escalating hostile climate characterized by student-to-student threats, intimidation, and retaliation.  The behaviors were sufficiently severe, pervasive, and offensive to lead the office of campus safety and security to act to remove students from the premises.   The dismissal of five students is an uncommon action for our small learning community.  However, Finlandia University does not tolerate verbal, physical, or electronic forms of intimidation, threat, or retaliation.   These behaviors are contrary to Finlandia’s core values for student success including a strong sense of community and personal well-being.     Finlandia  has not and is not cooperating with any social media outlet.  There has been no official statement or statements made from campus to any social media source, including this campus message.