It’s been over two months since 38-year-old Duane Kangas was last seen driving away from a gas station in Houghton. 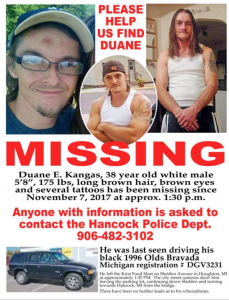 Hancock Police Chief Wayne Butler gave an update on the missing person investigation to the city council during his quarterly report Wednesday.

Butler said Kangas went missing on November 7th, four or five days after he moved to the city of Hancock.

Kangas was seen on video leaving the Krist Gas Station and then was spotted a couple of minutes later heading north across the bridge.

Butler said he has 23 hours of video following that sighting on the bridge but locating the vehicle in all that footage would be difficult.

Several agencies, including canine units, have offered to help with a search for Kangas, but the problem is there’s no place to start a search from.

Butler said the vehicle has not been found and they have not received the cell phone records from the service provider, though they were subpoenaed.

The license plate on the vehicle has also not appeared on any of the License Plate Recognition scans used at the Mackinac Bridge and on many police vehicles.

Butler called the case a mystery but said the investigation is still active.

Anyone with information on the whereabouts of Duane Kangas are asked to contact the Hancock Police Department at (906) 482-3102.

Kangas is described as a white male, 5′ 8″ and 175 lbs with long brown hair, brown eyes and several tattoos on his back and arms.

He was last seen driving a black 1996 Olds Bravada with Michigan registration #DGV3231.

A Facebook page, Help Find Duane Kangas, has been set up to help in the search.

Join Ahmeek Fire on the Fourth of July, Check Out Their New Truck

One of the Copper Country’s largest financial institutions has a new name.  As of yesterday, …