The Hancock City Council received several updates from the community at their regular meeting Wednesday.

Hancock High School Junior and Student Body President Colton Salani discussed the strides the student council has made over the last couple of years.

Since that time…the students have begun their own newspaper, students have appeared on the radio and in the newspaper to promote positive things going on at the school, been a part of organizing events like Wing Ding and Copper Bowl, and held several student-led meetings in the school auditorium where no teachers were allowed.

“I was given the authority to ask the teachers if they would allow me to have a moment of the whole student body’s time,” said Salani. “So I would spend no longer than 30 minutes but I would gather everybody up, mostly after lunch and we’d go into our auditorium and the student body council would talk to the students and they would ask questions and I though it went very well.”

Salani said one of the most notable accomplishments of the council was the Dimes For Downs campaign last year which raised over $1,200 for research into Down Syndrome. 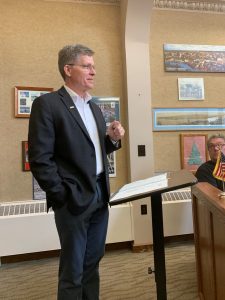 Finlandia University President Philip Johnson talked about the many advantages that both the school and the city have shared by working together.

Johnson said FinnU had a little over 14 percent enrollment increase in the fall with a double digit increase in retention from the previous year.

The most critical capital project of the summer is the College of Health Sciences with renovation beginning at the school.

Johnson said they will also focus on the Finnish-American Folk School this summer.

Finlandia’s Jutila Center houses 34 businesses in the Jutila Center with 111 full time employees, 42 business with 125 employees if the MTEC Smartzone is included. Johnson said, “It’s really an important piece in terms of how we understand together some of those things that can be key economic drivers for these communities that we care so much about.”

This fall, Finlandia will launch their Center for Vocation and Career Development will help further the college’s mission to promote vocational exploration.

This is also the 10th year of the Campus and Community Together for Good agreement which has provided scholarships and tuition assistance for over 200 Hancock graduates.

DNR Outreach Specialist Matt Torreano completed his round of visits to local municipalities with an update on the trail repair effort in the Hancock area.

He recapped the DNR’s monitoring of spring runoff and repairs made so far to the trail system which was badly damaged in the flood last summer.

While they were able to get the Bill Nichols Trail open to provide a route for snowmobilers up to Keweenaw County…the trail passing through Lake Linden remains closed.

Torreano outlined the DNR’s plan to repair the remaining trails but the size and cost of the project will likely spread the work out over the next few years.

“As with Hancock and the rest of the region, we have to utilize this year as a planning year,” said Torreano. “So we’re working through our planning process right now for how we’re going to structure our response over the next three years.”

The DNR will also use this year to secure the funding needed to do the repair work.

Michigan Department Of Corrections Tests Every Inmate For COVID-19