A mix of music, dance and drama–all were featured during a solemn ceremony celebrating Finland’s Independence Day.

December 6th has been celebrated in Hancock as well by the area’s prominent Finnish population.

Local actress Kris Kyro wrote and performed a play, along with actress and vocalist Kiersten Birondo, that talked about the pride felt by Finnish people on this day.

Kyro said, “It’s a day in the evening to get excited about who we are, where our people come from, the struggles that they went through to survive and everything that they fought so hard for.”

Music was provided by the Ilon Kaiku kantele ensemble followed by a performance by the Kivajat Dancers. 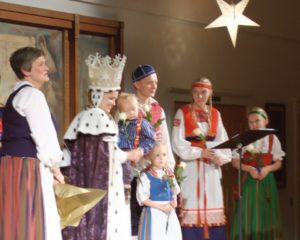 The highlight of the evening was the presentation of the 2017 Hankooki Heikki award, bestowed on a person for his or her contributions to preserving and promoting Finnish culture in the area.

Riikka says it’s an honor for the whole family to be given the award.

“We’ve been coming to Heikinpäiväevery year, pretty much, since we moved here fifteen years ago and always looking at the people and thinking they are doing something really great and we would never have thought that we could win it.”

The Hepokoski family will ride the giant kick sled in the Heikinpäivä parade next month.