Houghton Douglass Falls will soon be a State Park in honor of veterans.

The Michigan Department of Natural Resources purchased the falls Thursday and says it plans to reopen what is arguably the state’s tallest waterfall for the public to enjoy.

Houghton Douglass Falls is a location that many locals in Houghton County know very well, but haven’t visited in many years.

“Because of the erosion and everything, I closed it off and hopefully we’ve got someone with a budget now that can take care of some of those problems,” said landowner Jim Kuusisto.

This natural beauty is said to be Michigan’s tallest waterfall at 110 feet, and has been owned by the Kuusisto family for almost 70 years.

“My parents bought it in 1949 and I basically grew up there, so it’s been a part of my whole life. It’s very important to me to keep it as pristine as possible,” he said.

Ownership of the falls and the 70 acres that surrounds it changed hands Thursday as Kuusisto sold it to the Department of Natural Resources who plans to reopen the site as a Veterans Memorial Park.

“The site isn’t actually open to the public yet. We’re still working through those details but it’s still an important step in the process of getting that site open for everyone to enjoy forever,” said the DNR’s Stacy Haughey.

Before access to the falls is reopened, the DNR will have hand rails and handicap features installed, as well as a parking area, and memorial signage honoring those veterans. No official timeline has been disclosed at this time.

“We don’t have an exact date yet but when that site is ready and safe for everyone to go out and enjoy, we’re going to have another big ceremony out at the location for the residents of the state and also for the veterans of the state and visitors. We’re just honored to be part of the process,” Haughey said. 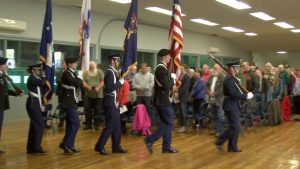 Before deciding to sell the land to the state, Kuusisto says he was contemplating selling it to a private owner, but once the idea surfaced to make it a veteran’s park, he decided otherwise.

“I’m a Vietnam Veteran myself, and there’s something relaxing about sitting on the edge and listening to the water falling down and I just wanted my fellow veterans to have a little more respect and recognition,” said Kuusisto.