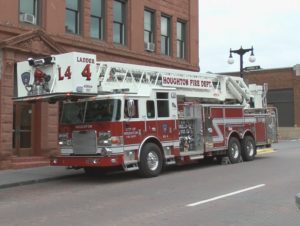 The new fire truck for the Houghton Volunteer Fire Department is here.

The 2015 Pierce model arrived Monday and was brought out to the City Center prior to Wednesday’s meeting of the Houghton City Council.

Houghton Fire Chief Mike Reynolds said, “The monitor system, that is actually in the platform itself. We can run that on the ground. We have cameras all around the truck, so we can what’s going on. If the guys are up in the aerial itself, we can see what they see, and we don’t have to put them in the aerial itself, the basket, to run. We can run water, we can control the nozzle and everything from right from the turntable.”

Aerial instruction will be conducted soon.

The cost of the truck is just over a million dollars, a purchase that is very much appreciated by the fire department.

Reynolds said, “I’d like to thank the taxpayers of Houghton, the city council and everything for making this happen for us. We’re very excited. This is a great addition to our fire department.

The fire department had been using a 1986 model, which will likely be sold to another department.