When the mini comics and games event Art Heart is held in Houghton next week, a famous voice actor from the Copper Country will be there as the special guest.

L’Anse native Patricia Summersett graduated from Houghton High School before moving on to eventually become the voice of Princess Zelda in the video game The Legend of Zelda: Breath of the Wild.

“I started to pursue it pretty quickly after high school, after my first forays in high school theatre. I did a stint of ice dancing which actually led me back to theater and I ended up making my home in Montreal, Quebec at first, doing a bit of touring, studying in London, coming back and then, ultimately, right now I divide my time between Montreal and L.A.,” said Summersett. 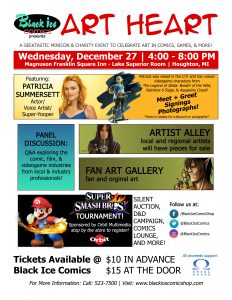 Black Ice Comics is putting on the event at the Magnuson Franklin Square Inn in Houghton on Wednesday, December 27th, from 4pm-8pm.

Summersett will be there taking part in a panel Q&A and meeting her fans.

Summersett said, “It’s for a great cause. It’s benefitting the Omega House. It’s also a bit of an experiment in terms of it’s the first mini-con, sort of ‘geektastic’ event that we’ve tried, both Shana Porteen and I, the owner of Black Ice Comics. So the more the merrier. It’s going to be a great event.”

Discounted advanced tickets for Art Heart can be purchased at Black Ice Comics for $10.