The Michigan Department of Natural Resources has finalized a master plan for F.J. McLain State Park, with $1.25 million appropriated for an initial phase of construction, which is slated to begin this spring.

In August, the DNR solicited public comments on the park master plan, which will guide developments at the park over the next 60 years. 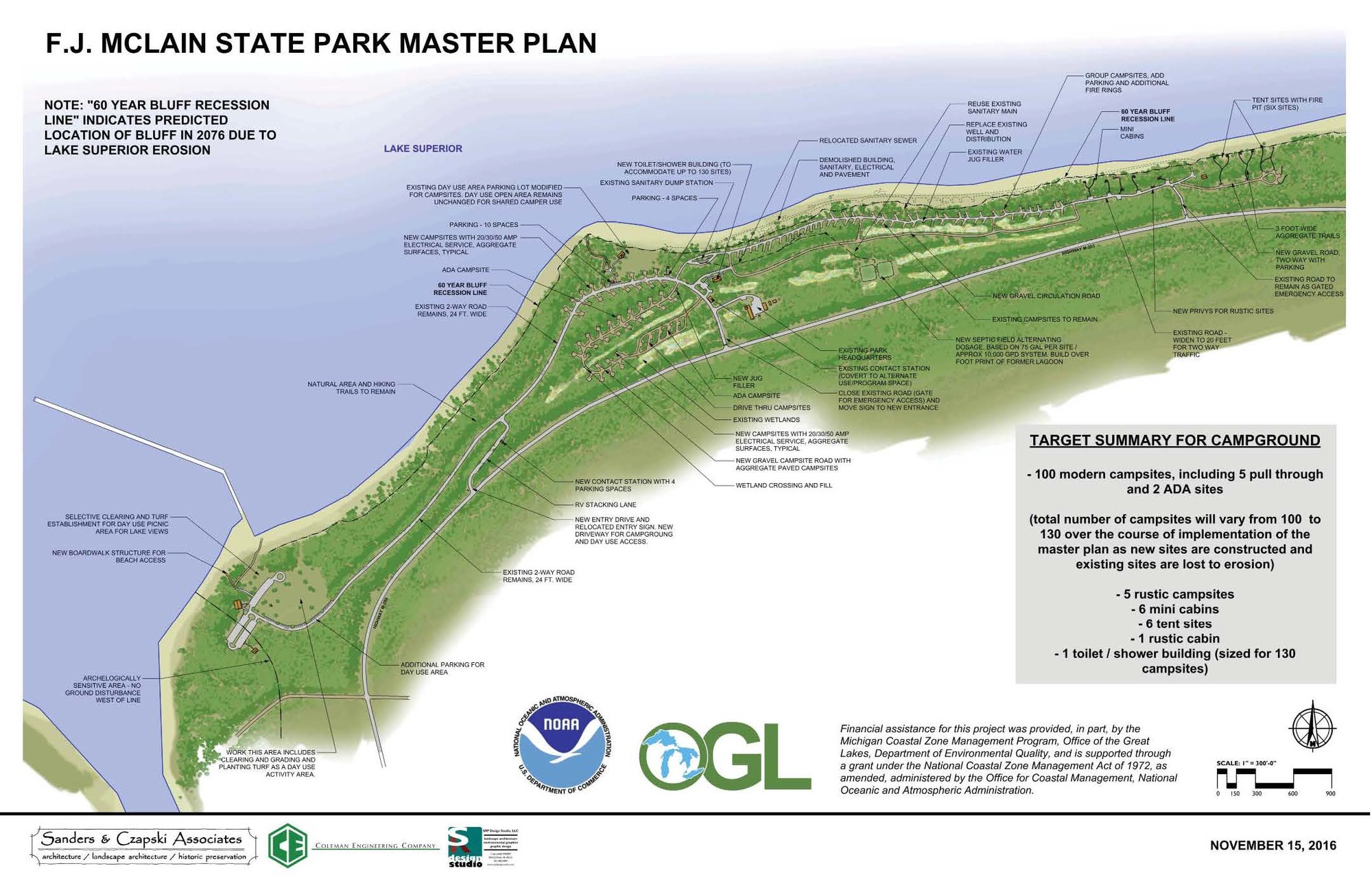 “Over 250 public comments were received,” said Eric Cadeau, a regional field planner with the DNR in Baraga. “The plan has been reviewed and accepted by the DNR Parks and Recreation Division and was presented to the Michigan State Parks Advisory Committee on December 8.”

The 443-acre park is situated between Calumet and Hancock in Houghton County and features two miles of windswept Lake Superior beachfront. The park is located about 10 miles northwest of Hancock, off M-203.

Severe storms occurring in September 2014 and January 2015 produced erosion that ate away park roadways, exposed utilities and large sections of embankment, forcing the closure of a dozen lakefront campsites.

Another 18 lakefront campsites, six mini-cabins and the park’s toilet and shower buildings remained threatened with closure because of the continued erosion.

With several factors involved, the shoreline is expected to continue to erode at the park over the next several decades. These changes are reflected in the master plan.

“The first phase of construction is set to begin this spring,” said Jamie Metheringham, unit supervisor for McLain and Twin Lakes State Parks. “This phase is proposed to include construction of a new toilet and shower building, modern campsites with electric service and a new road within the campground.”

These new developments will take place in the midsection of the park. 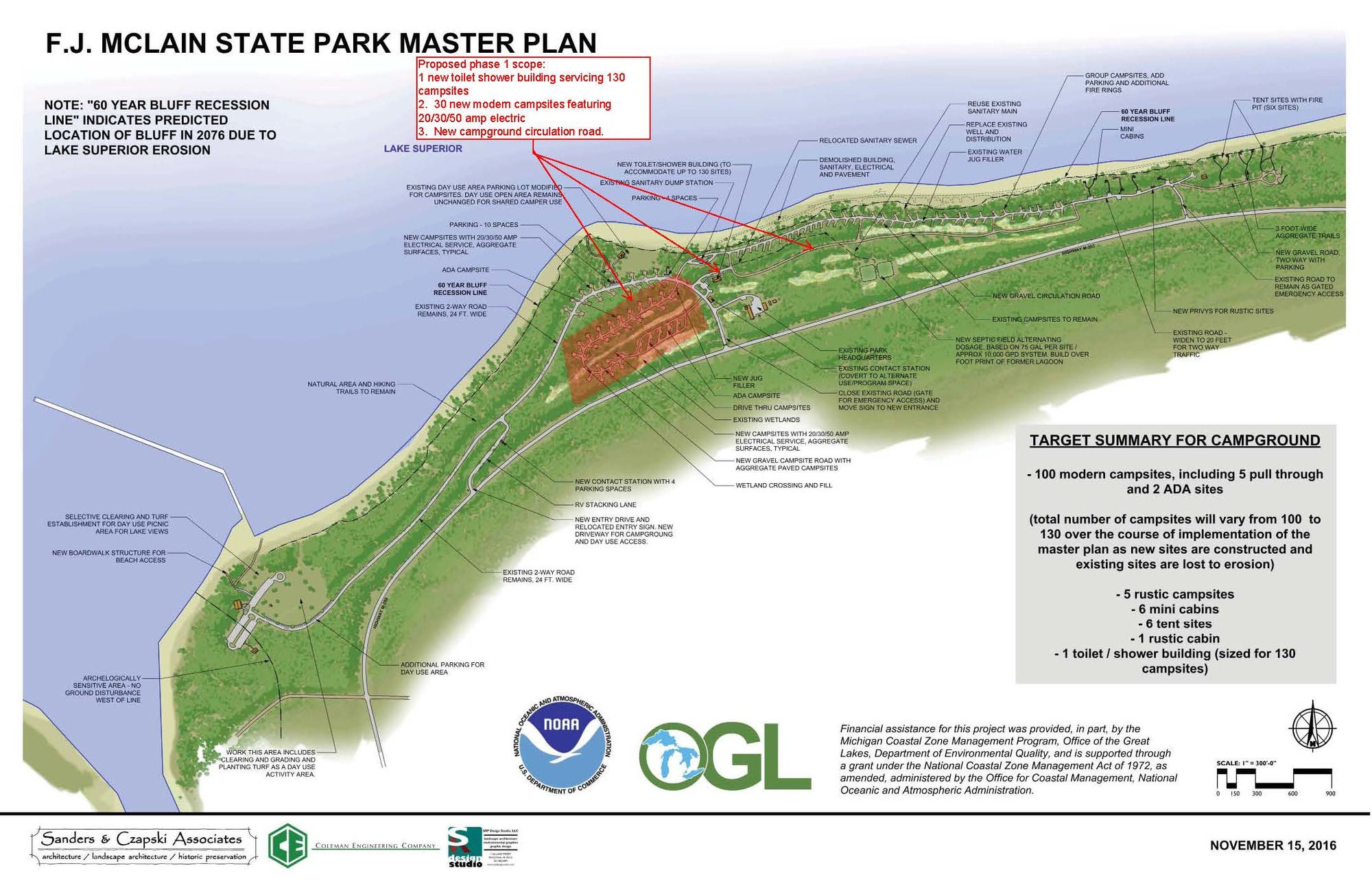 Cadeau said the campground toilet and shower building will be sized to serve 130 campsites. There will be 30 new modern campsites constructed with 20/30/50-amp electrical service.

The new campground circulation road will serve the existing campground. In addition, miscellaneous utility system modifications will be made.

During the upcoming camping season, park officials anticipate the unavailability of flush toilets and showers at the park. Because of the temporary loss of those services, campers will be charged semi-modern rates for campsites and mini-cabins.

Water, electric, and the sanitation station will be available, however short term utility interruptions may occur during construction activities, throughout the 2017 camping season.

“We appreciate your patience during this transition period and we apologize for any inconvenience this may cause,” Metheringham said.

Visitors to F.J. McLain State Park can enjoy a variety of activities in the park ranging from fishing, windsurfing, berry picking and beachcombing to camping, rock hounding, sight-seeing and hunting. The sunsets at McLain State Park are spectacular and the view of the lighthouse is magnificent.

Inside Michigan’s Great Outdoors subscribers are always the first to know about reservation opportunities, state park events and other outdoor happenings. Subscribe now.

Learn more about how the Recreation Passport gains you access to 102 Michigan state parks and more.

Share
Previous Two Arrested After Deputy Finds Their Vehilce In A Ditch
Next Copper Country Today–January 8, 2017