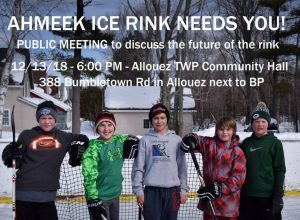 A public meeting is being held this week to discuss issues regarding the Ahmeek Ice Rink.

Allouez Township Supervisor Mark Aho says the ice rink is not in danger of closing but a lack of volunteers had raised the possibility of reducing the availability of the rink to the public.

“The problem the last several years is volunteering has gone down and we have had issues where people who want to have open skating, for example, are butting heads a little with people who want to play hockey, so basically we need to organize to make sure everybody gets their fair ice time and works together to keep the place operating smoothly,” said Aho.

Aho says the public meeting will help them better organize their volunteers to meet the needs of the rink.  “If there aren’t volunteers to open the door and make sure the snow is removed, which isn’t always a problem. There’s a local volunteer who often blows it off with his personal tractor so there’s a lot of community support for it, there really is and I don’t want it to sound like there isn’t. It’s just we need to make sure everybody’s on the same page,” Aho said.

The meeting will be held at the Allouez Township Community Hall on Thursday at 6pm.  Details can be found at https://www.facebook.com/events/367324507343224/