President Donald Trump’s executive order to temporarily ban travel from seven Muslim countries to the United States is taking its toll on students and faculty of Michigan Tech.

Though the President says this action will allow the U.S. to review its vetting process, what about those who are already here and contributing to our community? 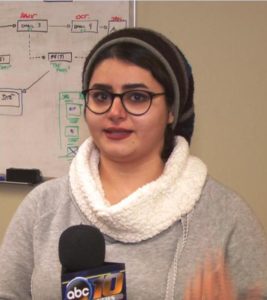 Naziri said, “Right when I thought I was on track and I can do the thing that I always wanted to, things have changed and right now I’m on a F-2 visa type, it means I cannot be a student unless I change it to a student visa.”

Because of the ban, Naziri cannot change her visa and if she goes back to Iran, she won’t be able to return.

Naziri said, “It makes me so sad and heartbroken that, not only I cannot see my parents and my family and my loved ones, I cannot pursue the only thing that I came here for.”

Naziri has pushed back her plans to begin at Tech until next Fall.

Ausama Al-Shammari is an exchange student from Iraq and the travel ban means his plans are on hold, including returning home to attend his brother’s wedding.

Al-Shammari said, “So now I cannot go anywhere. I have to stay here. I have to think about the news, I have to watch the news and see what’s going to happen next and this takes a lot of my time which may even affect my academic standing.”

This is Al-Shammari’s second trip as a cultural exchange student and he says this move by the U.S. will negatively impact both countries.

Al-Shammari’s said, “Thousands of students are coming here to study and exchange cultures. If this was cut, there will be no exchange of cultures anymore and there will still be misunderstandings and misconceptions about both.”

International students at Michigan Tech have received a great deal of support from the university and other students, like Johanna Thill from Minneapolis, Minnesota.

Thill said, “I think it’s much easier to turn people away when you don’t know them. But for me, it’s my friends, my professors, my TA’s who are affected by this and that they are not able to return to their studies, some of them, if they left the country on vacation or to see family because there was no warning, or also people who are missing important family events and that’s been hard to watch.”

Thill says there should have been more thought into the deeper effects of the ban.

Thill said, “And I agree that we need to keep our country safe, but I think we also need to realize that we are a country of immigrants and immigrants are what makes our country great and visiting scholars are a crucial part of any collegiate experience.”

She says studying with international students has been a wonderful experience, one she hopes others will be able to have as well. 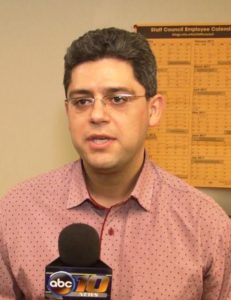 He has seen how the ban has affected not only the international students from the seven countries, but the student body as a whole.

Shahbakhti said, “We have a famous Persian poem that says that when parts of the body got into pain, the other parts also feel that pain, and I can see that this is happening and so you created that shock to say this to students from the seven countries, but the impact of the shock goes actually to more beyond that.”

For Shahbakhti, he has been affected more than just professionally from the ban. He’s three children were born in the U.S, but what message does this send to them?

Shahbakhti said, “Seeing that nationality being mixed with the terrorism, I’m worried that my children—they will be hesitating to consider part of their heritage of their family. So I wanted my children to be proud of their heritage, saying their father has come from Iran.”

Shahbakhti says the ban has created an unwelcomed environment for all immigrants coming to the United States.

At Michigan Tech, 10 Iranian faculty members have brought in close to $9 million in research dollars plus another $3 million from the Department of Energy for a new project, for a total of roughly $12 million.

Support the Gratiot Lake Conservancy with Their 2022 Giving Tuesday Campaign