Michigan Tech is again being named a Military Friendly school by Victory Media.

Rob Bishop is the Director of Academic and Community Conduct at Michigan Technological University, which has been given the distinction for the third time.

Michigan Tech is one of 1,160 schools to receive the Military Friendly designation.

In observance of Veteran’s Day, Michigan Tech has several activities planned for today. 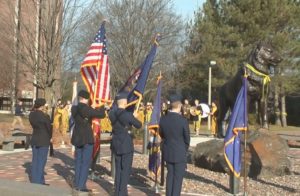 At 11am at the Husky Statue on campus, the Pep Band will play the national anthem with the presentation of the colors by a combined color guard from the Army ROTC and the Air Force ROTC.

Following the ceremony, all are invited to stop by several locations on campus until 3 p.m. to sign a Thank You post card to be sent to Michigan Tech alumni veterans, and get a free cupcake.

Post card locations are the MUB Commons, Library, lobby of the R.L. Smith Building (MEEM) the After Math in Fisher Hall or Fusion in the Dow Building.

A suite at the game has been set up for veterans. In addition, any veteran in attendance will be invited to stop by the suite between periods.

All those in attendance will receive an American Flag.

Tributes to veterans will play on the big screen during the game.

The Air Force/Army ROTC color guard will present the colors during the national anthem.