Winter Carnival has officially started and today begins the display of the magic created when Huskies are combined with snow. 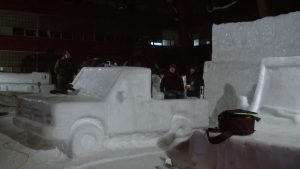 It’s snow statues and ski jumping and cartwheels in the snow. It’s a mosh pit (in 5 degrees).

On the side walks, pasties and pickled eggs are for sale, there’s all you can eat pancakes inside, and an undeniable blanket of happiness comforting the crowd.

Brice Richard of the MTU Four Wheeler club explains how their statue added a twist to the interpretation of this year’s theme. 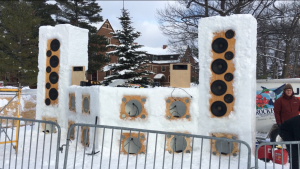 Richard said, “This year the theme is Myths and Legends of the Past- In Our Frigid Forecast. We were kind of just joking around and were saying ‘well, parking is a myth on campus’. There’s not enough parking, that’s a myth. We submitted it and, to our surprise, it was approved. Three weeks later this is where we’re at.”

Teammate Rachael Veeran said, “Parking services didn’t really like the whole idea, thinking it was derogatory towards the department and then after talking to Kirsti Isaacson, we’re ok with it now.”

As a symbol of their sense of humor, campus police issued one the jeeps a fictitious parking ticket…as a myth.

The team placed it under the windshield wiper where it remains on display. 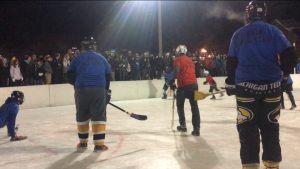 As the all-stars played broom ball, skiers and snow boarders formed a single file line climbing to the top of a 20 foot mound of snow that they each took turns riding down before choosing which jump to perform their stunt from.

Zareck Pirkola commends his teammates for all their hard work on the build.

Other statues are wrapping up this morning as judging and public display begins at 8:00.