Home / Featured / Out of the Darkness Walk To Fight Suicide

Out of the Darkness Walk To Fight Suicide

Suicide is the tenth leading cause of death in the United States, yet suicide is preventable. More than 100 people throughout Baraga County are expected to participate in the annual Baraga County Out of the Darkness Community Walk hosted by the Baraga County Suicide Prevention Coalition on Saturday, September 10th at the L’Anse Waterfront Park. 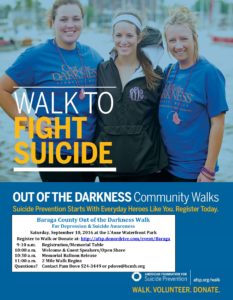 The opening ceremony, including guest speaker, Jeff Olson of Ishpeming, will begin at 10 a.m., followed by the memorial balloon release at 10:30 a.m. and the 2 mile walk at 11 a.m.  This fundraising walk supports the American Foundation for Suicide Prevention’s local and national education and advocacy programs and its bold goal to reduce the annual suicide rate 20 percent by 2025.

“We walk to raise awareness about this important health issue. Suicide touches one in five American families. We hope that by walking we save lives and bring hope to those affected by suicide,” said Pam Dove, Baraga County Suicide Prevention Coalition member.

The Baraga County Out of the Darkness Walk is one of more than 375 Out of the Darkness Community Walks being held nationwide this year. The walks are expected to unite more than 250,000 walkers and raise millions for suicide prevention efforts. With this walk last year, the Baraga County Suicide Prevention Coalition in partnership with several local organizations and walkers raised over $7,500 and had over 100 participants.

Guest Speaker at this year’s Baraga County Out of the Darkness Walk will be Jeff Olson, who after a long battle with depression and anxiety lost his son, Daniel, to suicide.  Jeff is also the head coach of the Ishpeming Hematite football team, whom as a team went on to win several state titles, the subject of a new documentary entitled, Do it for Daniel.  Jeff and his family have worked diligently to share their son’s story in order to help others.

“These walks are about turning hope into action,” said AFSP CEO Robert Gebbia. “Suicide is a serious problem, but it’s a problem we can solve. The research has shown us how to fight suicide, and if we keep up the fight the science is only going to get better, our culture will get smarter about mental health, and we’ll be able to save more people from dying from depression and other mental health conditions.” 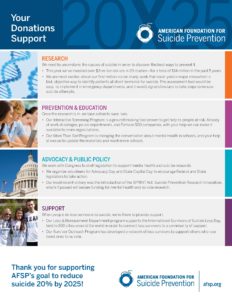 The coalition hopes that more sponsors will join in the cause to help raise funds needed for ongoing community resources and support.  According to Dove, “We have had excellent support in previous years.  In 2014, we were able to raise over $10,000, and in 2015, over $7,500 thanks to generous donations from local businesses and the hard work of our walkers who raise money on their own.

These funds have been used to bring much needed resources and trainings to our small community, including Mental Health First Aid (MHFA) for Adults; Mental Health First Aid for Youth; Applied Suicide Intervention Skills Training (ASIST) for local medical and mental health professionals; Facilitator training for Survivors of Suicide support groups; and our Paint the Field Blue – anti-bullying event which was held in 2014.  It is our hope to have another Paint the Field Blue event this year in conjunction with the September OOTD walk.

In addition, funds from the walk have allowed us to bring valuable resources to our local hospital and clinics, and schools.  High on this year’s agenda for the Baraga County Suicide Prevention Coalition is to continue to work with local schools on offering evidence-based prevention programs.”

As important as this funding is, much of the walk’s value lies in providing a safe venue for honoring, remembering and grieving for loved ones lost to suicide.

“There is still a great deal of stigma attached to suicide, but here everyone understands. We share our stories and support each other”, states Ann Marie Amsler, Baraga County Suicide Prevention Coalition member. “Suicide is a real public health issue, and it needs to be talked about openly. As more people realize that mental illness and suicide can happen to anyone, at any time, then those that are struggling will feel more comfortable asking for and accepting help.”

There are several resources available for those in need.  For more information about AFSP or any of its programs, visit www.afsp.org.  Other local resources include Dial Help which offers support via phone at 906-482-HELP (4357), text 906-35-NEEDS (63337), and via live chat with a crisis specialist at www.dialhelp.org.  An additional resource is the National Suicide Prevention Hotline at 1-800-273-TALK (8255).

Businesses and organizations interested in sponsoring the local OOTD walk can contact Pam Dove at 524-3449 or pdove@bcmh.org.  Individuals wishing to participate in the walk and/or donate can do so online at http://afsp.donordrive.com/event/Baraga.

The American Foundation for Suicide Prevention is dedicated to saving lives and bringing hope to those affected by suicide. AFSP creates a culture that’s smart about mental health through education and community programs, develops suicide prevention through research and advocacy, and provides support for those affected by suicide. Led by CEO Robert Gebbia and headquartered in New York, and with a public policy office in Washington, D.C., AFSP has local chapters in all 50 states with programs and events nationwide. Learn more about AFSP in its latest Annual Report, and join the conversation on suicide prevention by following AFSP on Facebook, Twitter, Instagram, and YouTube.

Michigan Tech will celebrate Homecoming this weekend. This year’s focus is on the centennial year …