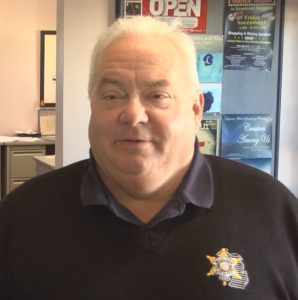 There’s not a new sheriff in town–that’s because voters reelected current Houghton County Sheriff Brian McLean to his sixth consecutive term on Tuesday.

McLean has spent his entire law enforcement career in the Houghton area, a job he is happy to continue doing.

Houghton County Sheriff Brian McLean said, “Oh, I’m absolutely thrilled! The support has been just tremendous. Elections are funny things, they can be complicated and they can be stressful, but it turned out wonderfully and getting all the encouragement from everybody was really, really very precious.”

McLean defeated his challenger, Houghton County Corrections Officer Derek Poyhonen, by more than a two to one margin.

At age 58, the Sheriff sees no reason to call it a career anytime soon.

McLean said, “Life can throw you so many curveballs at times and there’s things to consider—your health, for example. As long as I’m healthy, and I still enjoy getting up and coming to work, so it’s not a chore to work at all.”

The position of Undersheriff has been open since the beginning of October. McLean says an announcement concerning the position could come as early as this week.