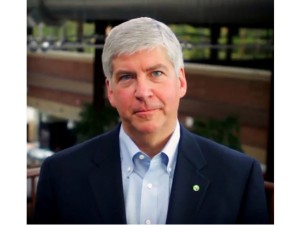 Governor Rick Snyder will be in the Upper Peninsula Monday to get a first hand look at the damage caused by last week’s storms in Gogebic County.

On Friday, Snyder issued a Declaration of Disaster which made available all state resources to assist local emergency response efforts, including the immediate need of restoring access across many of the washed out culverts along Lake Road near Little Girl’s Point.

The Governor also issued an Executive Order to activate the Michigan National Guard in order to assist local crews with these efforts.

Snyder is expected to take part in an aerial survey of the impacted areas with Michigan State Police-Emergency Management and Homeland Security Division this morning, followed by a ground tour of one of the work areas along Lake Road.