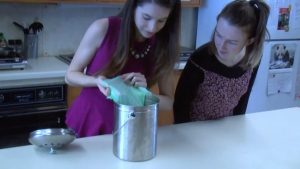 The 4 roommates are renting a house that was donated to the university by a prominent Houghton County family in the 1990s and they are converting it to a fully functional eco-friendly home for the purpose of teaching others how to lower their carbon footprint, and reduce utility bills.

From weighing trash bags before they leave the house, to installing low flow shower heads, the team is analyzing every aspect of their day to day lives to achieve self sufficiency.

Hannah McKinnon is a resident of the home.  “I’m really interested in lowering my personal waste output to the point that I sort of adhere to the zero waste movement. That’s my end goal.”

“I probably use more energy than the other house residents because of some of my hobbies, but I’m committed to reducing my numbers because if I can do that, I can save lot of money personally,” said roommate Thomas Richter, who offers a technical aspect to the team as a mechanical engineering student.

Roommate Mina Kukuk expresses her enthusiasm as a part of the project.  “I’ve been interested in sustainability basically my whole life. I’ve grown up composting and recycling. I knew I had to be a part of it because I knew I could help this project forward, and it was the best decision I’ve ever made. “

As the students try new ideas, such as growing their own food in an aquaponic garden, they record and monitor their data, making adjustments as needed. Another method of recycling used by the team transfers kitchen waste into fertilizer to be used in the garden.

Team Coordinator Rose Turner said, “One of us things we do in this house every day is we compost all of our kitchen scraps. We will put the peels inside our compost bucket, and then we will take that outside to a compost bin. It’s been pretty cold for the compost but hopefully once it’s warms up will start seeing some degree degradation.”

In addition to reducing its output, the house will also be reducing its input from the grid. It has been retrofitted with an 8,600 watt solar system that is scheduled for activation this week.

Updates on the project can be found at www.mtu.edu.