The winners have been announced in the Snow Statue Competition at Michigan Technological University’s Winter Carnival. This year’s theme is “Myths and Tales of the Past in Our Frigid Forecast.” 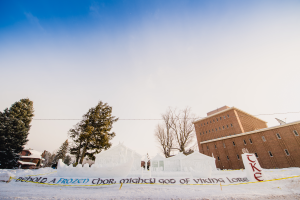 For the second time in the past three years, Tau Kappa Epsilon took first place in the month-long statue division. The winning entry, located along US-41 in front of the Administration Building, is “Behold a Frozen Thor, Mighty God of Viking Lore.”

Once again this year there were three divisions in the month-long competition — men, women and co-ed. Prizes were awarded to the top three statues in each division. The top three scores among all the statues were placed in the “Overall Month Long” section.

Second place in the overall section went to last year’s winner, Phi Kappa Tau for their depiction of the Kingdom of Camelot. Their entry is located in front of their house at 1209 Quincy St. in Hancock.

Third place overall went to Delta Sigma Phi. All three groups competed in the men’s division of the month-long competition

In the women’s division, Delta Phi Epsilon took the top spot with “A Creature of Purity and Grace caught in This Frozen Place.” Second place was awarded to Delta Zeta and Alpha Sigma Tau took third.

In the all-nighter category, St. Albert the Great University Parrish repeated as the overall all-nighter winner, followed by the Lutheran Campus Ministry-ELCA and InterVarsity Christian Fellowship. All three groups competed in the co-ed division.

Moose Lodge captured the top spot in the men’s division followed by Sigma Kappa Upsilon Mu, with the Men’s Rugby Club in third.

Phi Delta Chi was the lone entry in the women’s division of the all-nighter competition.

Summarized below are the results from the 2018 Winter Carnival Statues Competitions!