Two members of the Keweenaw Bay Indian Community’s Beartown Firefighting squad were killed Saturday in a traffic crash in Minnesota.

Dead are 25-year-old Alan Swartz and 23-year-old James Shelifoe, both of Baraga.

A statement posted by the KBIC indicated that those who were injured are expected to recover. Individual conditions are not available because of medical privacy laws.

Photos from the scene show the vehicle broken into two pieces, just behind the driver’s seat.

The firefighters were on their way to an assignment at the Box Canyon wildfire in Utah. The crash occurred around 3:00 pm. Both sides of the highway were closed for more than two hours during the investigation and cleanup. A Facebook post by the KBIC on Sunday indicated that 11 other firefighters were traveling to the same location in a different vehicle. Those in the second vehicle did not observe the crash.

Tribal officials say the KBIC is devastated by the tragedy, and appreciate the outpouring of support from the community.

The L’Anse and Baraga Fire Departments will be holding fundraisers Monday to help the families of the victims. Help “Fill the Boot” between 1:00 and 6:00 at the L’Anse Fire Hall in downtown L’Anse, or at the Eagle Radio studios on US-41 in Baraga.

Additional fundraisers are being planned throughout the Copper Country this week.  We will post details about them as they are made available.

The Beartown Firefighters is a Type Two Wildland Firefighting Hand Crew. It is jointly run by the KBIC and the Bureau of Indian Affairs. Most of the firefighters are KBIC Tribal members from Baraga County, although some come from other tribes, or are non-natives.

Here is the initial statement released Saturday by the KBIC:

“The Keweenaw Bay Indian Community learned this evening that our Beartown Firefighting crew was involved in a tragic traffic accident. Two of our fire fighters were killed and several others were severely injured. Our hearts are broken and our prayers are with the family members and those injured.

We are continuing to gather information on the condition of each and every fire fighter who was sent to the Box Canyon fire. It has been difficult due to privacy laws. If any family members have questions, please contact the Tribal Police Department 353-6626.

There will also be staff at the Tribal Center to process Emergency Medical Travel beginning tonight. Family needing assistance should contact Larry Denomie at 201-0631.

Our thoughts and prayers are with the families.”

Here is the second statement, released on Sunday: 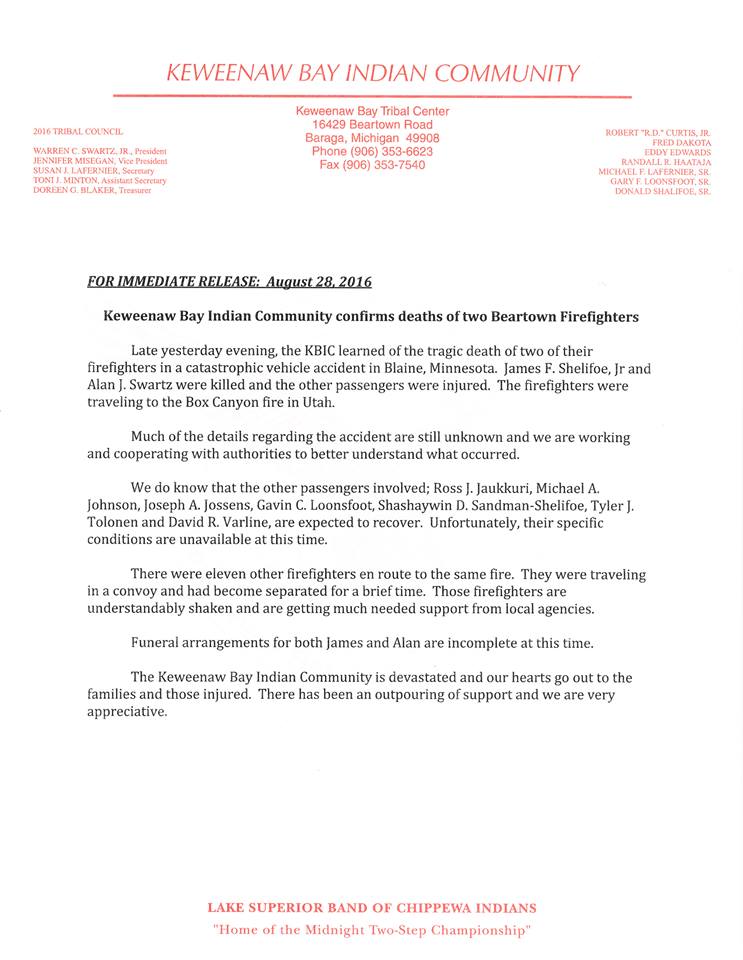