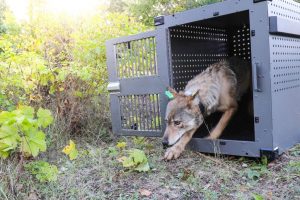 Mark Romanski, Isle Royale National Park’s Division Chief for Natural Resources and project lead for the wolf reintroduction efforts, had been monitoring GPS data from each of the translocated wolves in preparation for the Canadian wolves.  He noted the wolves had been moving about the southwestern end of the park. However, no locations were reported for nearly 5 days, between Jan 27th and Feb 2nd.  This can happen when a wolf is hunkered down in dense forest cover and there is no clear view for the collar to transmit data up to the satellites.  Blinded by the poor satellite transmissions, the park needed aerial observations to help locate the translocated wolves.

Michigan Technological University (MTU) researchers arrived on Saturday and within hours of landing,  Rolf Peterson, principal investigator for MTU, and his contracted pilot, Don Murray of UpNorth Aerials, were in the air radio-tracking the translocated wolves.  After confirming the presence of two of the three collared wolves, the team directed their attention to a very static filled signal radiating from off Isle Royale’s north shore towards Canada.  “We followed the signal toward the north shore of the island and finally out over the open water of Lake Superior,” stated Rolf Peterson.  “A lead a half mile wide had opened a few hours before, as the ice bridge was dislodged by a strong northeast wind. We flew out across the open lead and out over the ice pack then determined that the wolf’s signal was still to the north, straight to the mainland.  We gave up further search because the weather was deteriorating and evening was approaching.” Immediately prior to twilight, the plane returned to Windigo with Peterson suspecting a wolf had departed the island. 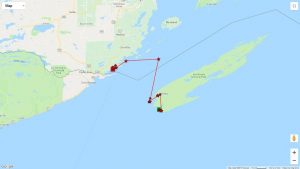 Peterson reported his findings to Romanski, and later on the same day, satellite GPS data from the collar confirmed their suspicion.  Romanski documented the departure from the island of F003, a female wolf translocated to the park in October 2018.  The wolf departed the island on January 31, 2019, headed north and then west to a location just north of the Pigeon River, on the border between Canada and northeastern Minnesota, United States (See Map).

The map above depicts locations for F003 between Jan 26th and February 02nd, 2019.  This female crossed over an ice bridge formed by the recent polar vortex on January 31st, enroute to an area close to Grand Portage where she was translocated from in early October of 2018.

“I was excited to see locations after not seeing anything for five days, but that excitement quickly gave way to disappointment as my eyes followed the track that led away from Isle Royale.  I knew this could happen but of course you always hope for the best, “ said Romanski. It was understood throughout the planning and implementation processes that there was a strong possibility of emigration, as wolves have been documented to return to their territory after long distance movements, natural or human- induced.

Dave Mech, USGS Wolf Biologist and former member of the Isle Royale research team, has documented such movements in the past.  Mech commented, “the early research on wolf translocation indicated that if you moved a wolf less than 80 miles it typically would try to return home, especially if it was a breeding animal.  So a Minnesota wolf trying to return is not surprising.  However, we also found that if they were held in the release area for three to four weeks they generally stayed in the area.  Since all of the new wolves were moved in the fall it will take time to tease out the behaviors related to translocation.  The Isle Royale wolf translocation is new territory in understanding wolf behaviors and will be ground –breaking with new information as it unfolds.”

Isle Royale park Superintendent, Phyllis Green, noted, “Nature and the instincts of wildlife will always prevail in the wilderness of Isle Royale. When we made the decision to restore the predator-prey relationship, we knew we would have to respectfully work with whatever curves nature threw at us, whether it’s adverse weather or wolves working out where they choose to fit on the landscape. We’re going to continue the project for the next 3 years, a window we feel affords us the opportunity for successful restoration.”  Green continued that they have not received final funding for the project this year due to continuing budget resolutions, but is optimistic this year’s translocation efforts planned for Canada and Michigan can remain on track through partnership efforts by the National Parks of Lake Superior Foundation and funding from the National Park Service.

The NPS continues to work with the Ontario Ministry of Natural Resources and Forestry to move wolves from Canada this winter.  The recent polar vortex that created the bridge to the mainland also disrupted translocation efforts and forced the team to adjust their plans.  MTU researchers will stay on Isle Royale to complete annual survey efforts until March 4th.