This story can be found at http://www.finlandia.edu/news/women-playing-hamlet/ 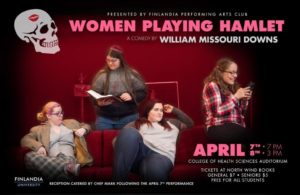 A journey of self-discovery with a nod to the long-standing tradition of the theater will be on display April 7-8 on the campus of Finlandia University as the Finlandia Performing Arts Club presents “Women Playing Hamlet,” a comedy written by William Missouri Downs.

“This play is a lot of fun, and I am excited to watch our club pull it off,” said Soren Schmidt, Campus Pastor at Finlandia University and Director of the play. “Our actresses and stage crew have worked hard to make this play a reality. It will be a magical couple of nights on our campus.”

There will be two showings of the play with the first on Friday, April 7 at 7 p.m. and the second on Saturday, April 8 at 3 p.m. Tickets are $7 for general admission, $5 for senior citizens and free for all students. Tickets will be available at the door or at North Wind Books. Parental guidance is suggested as there is some adult humor in the play.

This play is taking place in the historic auditorium of the Future College of Health Sciences Building. It is the first time the auditorium has been open to the public since the former Hancock Central High School building was acquired by Finlandia University in 2010.

“It’s fun to be in there, and experience that space,” said D.J. Skinner, a sophomore at FinnU who is playing the lead role of Jessica in Women Playing Hamlet. “There is so much potential in this theater.”

All funds raised will be used to help update the auditorium and continue to allow the Finlandia Performing Arts Club to host events in the space.

“We’re looking forward to this as a start both for our club and the revitalization of this beautiful space,” Schmidt said. “It would be so meaningful for all of us to see a great crowd come out to support us.”

Following Friday’s performance, there will be a reception in the gymnasium of the building. Refreshments will be served at the reception, provided by the famous Chef Mark of Finlandia University Dining Services. All who attend the play are invited to the reception.

ABOUT WOMEN PLAYING HAMLET, A PLAY WITH U.P. TIES

Hamlet’s a challenge for any actor, but when Jessica is cast as the titular character in a New York production, it sends her into an existential tailspin. It doesn’t help that her acting coach is borderline abusive, or that every Starbucks barista with an MFA tells her she’s too young for the role. Or that she’s somehow managed to make Sir Patrick Stewart her nemesis. Not to mention the fact that she’s a woman. How can Jessica figure out “to be or not to be,” when she can’t even figure out herself? Featuring an all-female cast performing multiple roles, Woman Playing Hamlet is rip-roaring fun for Shakespeare fans and haters alike. 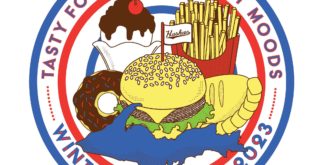 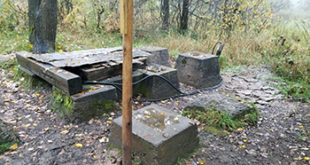 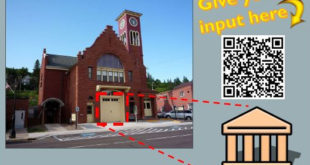