Life is back to normal in L’Anse, after natural gas service to the village and the surrounding area was cut off by a car crash early Friday morning. SEMCO rushed repair crews to the area from as far away as Port Huron and Holland. They turned off the gas meters at each of the 1,200 customers affected. Repairs to the fractured line were completed late Friday. By late Saturday, crews had visited almost all of the customers again to restore service, and safely relight gas appliances. Service could not be restored to a few buildings to which they could not gain access. If you own such a building, and are still without service, call SEMCO at 1-800-624-2019 to arrange for a hookup.

A Red Cross emergency center that was set up at the Baraga School was only lightly used. Officials said the combination of relatively warm temperatures and the knowledge that homeowners had to be at home to have their gas restored kept attendance low. Brisk sales of space heaters were noted at area stores. Secondary warming centers planned for the Big Bucks Bingo Hall and Keweenaw Bay Ojibwa Community College were not needed. The Baraga School site was closed mid-day Saturday. The Baraga County Sheriff’s Department said no injuries were reported because of the outage. 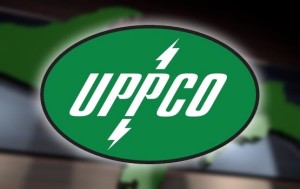 It was UPPCO’s turn to send repair crews out yesterday. High winds and heavy ice caused power outages across the region. At one point, more than 1,200 customers were without service in Keweenaw County. The company handled additional outages in Houghton and Ontonagon Counties. Their Twitter feed reported that many were caused by tree limbs that collapsed onto lines because of heavy ice and high winds.

The high winds and ice affected much of the Upper Peninsula. Sizeable power failures were reported in Ishpeming and Munising. The Mackinac Bridge was closed for a time because chunks of ice were falling from the cables.