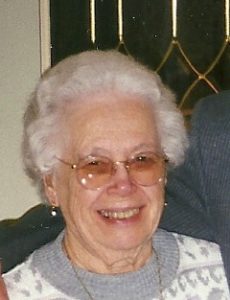 She was born in Lake Linden on August 22, 1920 and graduated from Lake Linden-Hubbell High School with the class of 1938.

After graduation, she did housework for people and babysitting.  Then, she got a job as a telephone operator for Michigan Bell until the dial system came about.  She later worked for 58 years at the variety store in Lake Linden, formerly Ben Franklin Store-L&M Variety and Al’s General.

In 1948, she married the love of her life, George Vollmer.  They were married for 64 years.

Mabel was very busy during her life.  She started sewing at age 12.  Sewing and doing crafts were her hobbies.  She also made many quilts and was known for giving many away.  She also enjoyed making thimbleberry jam.

Mabel was a caring person who enjoyed the friendship of many.  She enjoyed telling stories about her life and had such a fantastic memory.

She dearly loved her family and all the children.

Her family wishes to thank the staff at the Lighthouse at Hubbell for their compassionate care.

She was preceded in death by her husband and a grandson-Roger Latowski.