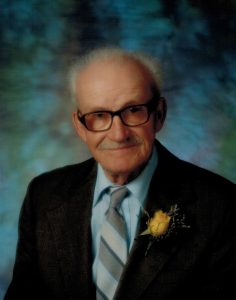 Merlyn Joseph “Pinky” Rastello went home to be with the Lord on August 24th after a brief illness.   He was surrounded by his family members and died peacefully.
He was born February 10th, 1924 in Laurium, Michigan, the son of Joseph and Agnes (Slusarzyk) Rastello.   He graduated from Sacred Heart High School in 1942.   Pinky served in WWII from 1943-1946 in the US Army 9th Infantry Division.   He spent 20 months overseas. Initially stationed in England, he landed on Utah Beach in Normandy and served in Northern France, Luxemburg, Belgium, Germany and Austria.  He was wounded in the Battle of the Hurtgen Forest and was awarded the Purple Heart.  He was also awarded The Bronze Star and The Combat Infantry Badge.
Prior to being drafted, he worked in Detroit for Wolverine Tube in the War Production Ammunition Division.  He also worked for C&H Mining for several years and the Michigan Department of Transportation as a State Highway Inspector for 29 years, retiring in 1984.
He was married to Mary Jean Butler in 1950 who preceded him in death in 1981.  He is survived by his six children, Andrea (Gary) Marcotte, Joel (Robin) Rastello, Anthony Rastello, Jon (Karen) Rastello,  Mary (Rick, deceased) Baron and Jeffrey (Regina) Rastello.  He is also survived by 13 grandchildren;  Jessica (Scot) Stodart, Molly (Michael) Hartnett,  Adam (Sara) Marcotte,  Jessica Rastello,  Erik (Christie) Rastello, , Nicole (Shawn) Granlund, Matthew Rastello , Corey Rastello, Kara (Brandon) Lindeman,  Madeline (Jessey) Poissant, Henry Baron,  Maximus and Zane Rastello,  6 Great Grandchidren,  Abigail and Graham Stodart,  Daniel Marcotte,  Evelyn and John Rastello,  Frederick Poissant,  and two sisters:  Evelyn (Frank, deceased) Karkoski and Bernice (James) Bennetts.
He was a lifelong member of Sacred Heart Church, and was a member of VFW post 3900.  He enjoyed most sports, loved fishing, antique auto restoration, designed and built his own model airplanes, loved inventing, reading and gardening.  He loved science and was passionate about learning until the very end.    He had a great sense of humor and a warm smile
He had a heart for those in need. He gave to numerous charities and spent a great portion of his life caring for his longtime friend Raymond Frazier.
He was greatly loved and will be greatly missed by his family and friends.
Friends may call at the Erickson Crowley Peterson Funeral Home on Sunday, August 27, 2017 from 4:00 pm to 7:00 pm. A parish prayer service will be held at 6:30 pm, on Sunday, August 27, 2017 at the Erickson Crowley Peterson Funeral Home.
Funeral Mass will be held at 11:00 am on Monday, August 28, 2017 at the Sacred Heart Catholic Church in Calumet with Father Abraham Mupparathara to officiate.
Burial will take place in Lake View Cemetery.
In lieu of flowers, and in the spirit of his charitable nature, please consider a donation to the Mary J. and Merlyn J. Rastello community service scholarship fund which assists Calumet High School students in furthering their education.   Donations can be sent to the family at 130 South Kearsarge Street, Laurium,  Michigan 49913.
Online condolences for the family may be left at www.ericksoncrowleypeterson.com
The Erickson Crowley Peterson Funeral Home in Calumet is assisting the family with the arrangements.
Share
Previous Girl Scouts Launch 23 New STEM Badges
Next Genevieve “Yoohs” Ponnikas