Everett “Mike” Vincent Allen passed away on Saturday, May 12th, 2018 at his home in Kenton, MI.

He was born on November 26, 1926 in Marquette, MI to the late Alfred H. Allen and Irene (Sanders) Allen of Kenton. Everett grew up and went to school in Kenton, MI where he spent his entire life except for the time that he served in the US Army during World War II from year 1945 to 1947 as Private First Class in Company A, 1st battalion, 17th Infantry. Prior to serving in the military Mike had started his own Logging Trucking business, E. Allen Logging. After serving in the US Army he continued with this business until his retirement in 1988.

Mike was a member of the Covington VFW Post 8945 and American Legion in Kenton and Trout Creek and was also a member of the Covington AMVETS. He marched in every Memorial Day Service from 1947 to 2017 and missed only one service in all those years. He was an active outdoorsman who loved to hunt and fish. One of his passions and favorite places to be was at The Pond where he built his cabin in 1965 and later in 1972 started construction of The Pond where he spent countless hours improving it.

Everett was honest, reliable and hardworking. He was always there for his family and friends and would give anyone a helping hand. Everett touched the lives of many people with his way of striking up a conversation and jokes while maintaining his trademark sense of humor all the way to the end. He will be deeply missed.

He is survived by his devoted and loving wife of 63 years Marlene (McRae) Allen; and 5 children Larry “Joe” Allen, Sharon (Allen) Melin both of Grangeville, Idaho, James “Eb” (Sally) Allen
of Sidnaw, MI, Thomas (Rosana) Allen of Kenton, MI and Kathy Allen of Sidnaw, MI. He is also survived by numerous grandchildren and great grandchildren, nieces and nephews.

He was preceded in death by his parents and his son Donald “Ziffle” Allen, 2 brothers,
Chester and Robert and a sister Helen (Griffin) Allen. 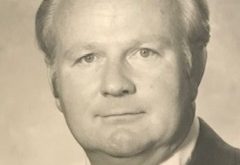