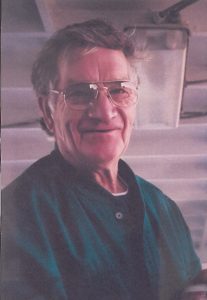 Bootjack: George “yrjö” Richard Niskanen, 96, of Bootjack, passed away at the Lighthouse at Hubbell on January 9, 2018.
George was born on the farm in Princess Point on February 5, 1921 and spent his entire life living in the Bootjack area. He completed 8th grade in the School House across the road from his family farm. He joined the Navy in 1944 and was given an Honorable Discharge, so he could return home to help take care of the family farm while his Mother was ill. He worked various jobs but was best known to everyone as a Jack of all trades. He built many of the first docks and seawalls in the Bootjack area and was known for his ability to repair anything that needed it. Some of his work can be seen at Quincy’s restaurant as he spent one winter completing all of the woodwork there. George was a member of The Bootjack Fire Department and The American Legion Post 90 in Lake Linden.
George was very proud of his Finnish Heritage and as anyone who knew him would say, he was full of “Sisu”.
He was preceded in death by: Parents – Charles “Kalle” & Elviira (Kumpula) Niskanen; Sisters – Esther Wehrmeister, Elvira Oja, Hilija Jutila, Kathryn Shellgren, Ellen Kaye, Linda Monette, Margaret Beaudette, Helen Kariott, and Ruth Holland; Brothers – Victor, Charles, Paul, and John.
He is survived by: a sister – Gertrude Andorf; Brother in Law – Wally Kariott; Special nephew – Ron Beaudette; and numerous Nieces and Nephews.
A Memorial Service, to honor George, will be held this summer. According to George’s wishes his burial will be alongside his parents in the Lakeview Cemetery in Calumet. The Pearce Funeral Home is in charge of arrangements.
The family wants to thank the nurses and staff at the Lighthouse of Hubbell for the professional care and compassion they have shown George in the five years that it was his home.
Online condolences may be left at pearcefuneralhome.com