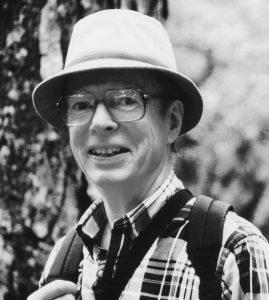 James Edward Boyce passed peacefully on August 1st at Portage Pointe nursing home in Hancock at the age of 97. Jim was born on July 17, 1922, in Buffalo, New York, the son of James G. Boyce and Nina Pilkenton Boyce. He grew up in Bronxville, New York, where he attended an elementary school based on the educational philosophy of John Dewey, an experience that made a lasting positive impression.

After graduating from high school in Rochester, Indiana, Jim went to General Motors Institute in Flint, Michigan, in a cooperative engineering program where classroom studies alternated with work in the auto plants. His GMI years were broken by World War Two, when he served in the infantry in Europe and the Philippines. After a postwar entrepreneurial stint with his beloved brother Charles, selling homemade “Lucky Club Cola” on the campus at Indiana University, he returned to GMI, graduating in 1949.

He met the love of his life, Alice Hobbs, on a blind date in 1947 when she was visiting relations in Brown County, Indiana. They married in Topeka, Kansas, Alice’s hometown, in December 1949. They lived briefly in Muncie, Indiana, where Jim worked at the Chevrolet plant, before moving to Lafayette where he entered graduate school in psychology at Purdue. Their first child, James Kenneth, was born there in 1950.

In 1953 they returned to Flint, where their son Daniel Hobbs and daughter Marilyn Anne were born. They moved to Troy, Michigan, in 1956, when Jim was transferred to the GM Technical Center in Warren. During their years there he and Alice joined the Birmingham Unitarian Church, where he served as president of its board of trustees. After 22 years with General Motors, he began a new career in academia in 1968, organizing an adult continuing education program at Oakland University.

Jim moved to Houghton, in the “Copper Country” of Michigan’s Upper Peninsula, in 1970 to join the business school faculty at Michigan Technological University. One of his proudest accomplishments were helping MTU obtain its MBA program accreditation.

Jim realized a long-cherished dream of working in developing countries in 1977-78, when he received a National Science Foundation grant to work on management training with local industries in Medellin, Colombia. In the early 1980s he carried out research at the Monterrey Institute of Technology in Mexico. In both places, to his delight, he happened to overlap with brother Charles, who had become an urban planner.

After his retirement from MTU in 1984, Jim and Alice traveled widely in Europe, China, and throughout Latin America. Jim was an ardent advocate of multi-lingualism, and he and Alice worked tirelessly on their Spanish language skills. In 1994 they served as election monitors in El Salvador following the country’s civil war. In the morning on election day, Jim had a heart attack, and after being evacuated by the United Nations he had a successful bypass operation in Marquette.

Jim and Alice dearly loved the Copper Country, and it became their true home. In November 1994 he was elected to the Houghton County Commission, where he sought to promote development while conserving our beloved natural beauty and heritage. He and Alice were founding members of the Keweenaw Unitarian Universalist Fellowship, and he was active in many civic organizations including the Houghton County Planning Commission, the Copper Country Heritage Council, the Keweenaw Land Trust, and the Rotary Club.

Jim is perhaps best remembered for his indefatigably upbeat optimism and his great generosity in both spirit and deed.

To view Jim’s obituary or to send condolences to the family, please visit www.plowefuneralhome.com.