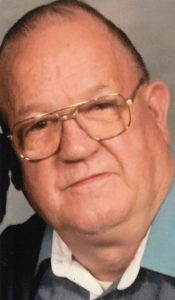 Richard A. “Richie” Norlin, 86, a Dollar Bay Businessman and resident passed away surrounded by his family at home Thursday, August 1, 2019, following a lengthy illness.

He was born on November 5, 1932, in Hancock, MI, a son of the late Axel and Ina (Johnson) Norlin. Richie was raised in Dollar Bay and was a graduate of the Dollar Bay High School with the class of 1951.

Richie worked at Sveds Service Station in Dollar Bay as a teenager and then Horner Flooring after graduating from high school.

Mr. Norlin was a veteran having served with the United States Army and was stationed overseas.

Rich returned to the Dollar Bay and worked for Copper Country Dairy. In the Spring of 1958, he opened Richie’s Market. Mr. Norlin was proud have owned and operated Richie’s Market for nearly 60 years. He first started by working during the day for Copper Country Dairy and the nights and weekends at the market. While working at the Market, he would meet his future wife and on August 13, 1966, he was united in marriage to the former Theresa Ann Joyal. On January 18, 2002, she preceded him in death. He also worked part-time as a postal clerk in the Dollar Bay Post Office for 29 years retiring in 1996.

Richie was a member of First Lutheran Church of Dollar Bay and Bay Post #6028 where he had served as Commander multiple times. He was an avid sports fan rooting for all Detroit teams especially the Tigers and Red Wings. He always enjoyed talking sports with his customers at the store.

Preceding him in death were his wife, his parents, his brothers and sisters: Chester, Ernest, Margaret, Irene, Alice and Lucille.

His granddaughter: Caitlin Norlin of Baltic

Funeral services for Richie will be held 12:00 pm Saturday August 10, 2019, at First Lutheran Church of Dollar Bay with Vicar Micah Cavaleri to officiate. Burial will be in the Forest Hill Cemetery.

Friends may call on Friday August 9, 2019, from 6 to 8:00 pm at the Memorial Chapel Funeral Home of Hancock and on Saturday from 11:00 am until time of services at First Lutheran Church of Dollar Bay.

In lieu of other expressions of sympathy, the family suggests that memorials be given to Portage Lake Home Health & Hospice or to Little Brothers Friends of the Elderly in memory of Richie Norlin.

To view Richie’s obituary or to send condolences to the family please visit www.memorialchapel.net.

As received from the O’Neill-Dennis Funeral Home: Calumet: Shirley A. Kopke, 89, currently residing at …