There will be no Michigan Tech hockey again this weekend. The Huskies missed last weekend’s series at Minnesota State because of positive COVID-19 tests. That set will be made up March 5th and 6th. The games against Ferris State University that were scheduled for this coming weekend will be played on a pair of Tuesdays, February 2nd and February 9th.

The Finlandia University men’s hockey team has released its schedule for an abbreviated season. The Lions will play four home-and home series against Northern Collegiate Hockey Association opponents. The first set will be against Marian University, February 5th in Hancock, and February 6th in Fond du Lac.

Finlandia, Marian, Concordia-Wisconsin and Saint Scholastica will make up a Northern Division within the NCHA. Adrian, Lake Forest, Trine and Aurora will comprise the Southern Division. The top two teams from each division will make the Harris Cup Playoffs.

The Finlandia women’s hockey team has opted not to play this season.

The Detroit Red Wings have set their roster for the opening of the NHL season. Former first round pick Evgeny Svechnikov cleared waivers, and has been assigned to the Grand Rapids Griffins. Former first rounders Michael Rasmussen and Dennis Cholowski are among those assigned to the taxi squad. The taxi squads have been put in place to provide a pool of players who travel and quarantine with the NHL teams, and can be added to their rosters if needed without having to go through COVID-19 protocols.

The Wings open their season at home tomorrow night against the Carolina Panthers. Coverage begins at 7:15 on 99.3 The Lift.

The Detroit Pistons host the Milwaukee Bucks tonight. Coverage begins at 6:35 on 99.3 The Lift.

The Detroit Tigers and pitcher Michael Fulmer have agreed to a one-year contract. The deal is reported to be worth $3.1 million. It heads off a potential arbitration hearing. Fulmer struggled last season, as he tried to recover from Tommy John elbow ligament replacement surgery.

Detroit has eight other players also set for arbitration.

The Milwaukee Brewers have signed utility player Daniel Robertson to a one-year deal. Robertson has played for the Tampa Bay Rays and the San Francisco Giants.

The Chicago Bears have announced that head coach Matt Nagy and General Manager Ryan Pace will return next season.

John Schneider has signed a contract extension to remain as general manager of the Seattle Seahawks. There had been reports that the Detroit Lions were trying to lure him away. 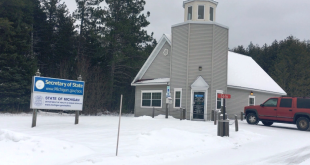