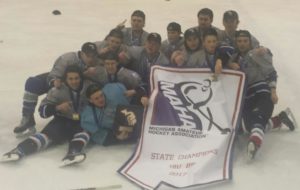 The Calumet Midget U18 hockey team defeated the Livonia Bruins Sunday night 4-2 to win the Michigan Amateur Hockey Championship. Dylan Boberg, Robbie Erkila, and Graham Frantti scored for the Kings. The Kings were down early 1-0 but Boberg tied the game on a wrist shot with Chet Hilstrom and Cam Kaupinnen assisting on the goal. The Kings found themselves down again 2-1 in the second but the defensive play of Nick Djerf and Tyler Rautio freed up the puck to Frantti, who scored on a hard slapshot. Later in the second, Trevor Kangas stole the puck on a Livonia power play, passed it to Tyler Johnson who fed Robbie Erkila on a breakaway for what would be the winning goal. The third period began 3-2 and stayed that way until Frantti added the empty netter with less than a minute left. Ian Carroll was in net for the win. The Kings finish the season state champs and undefeated at 30-0.

High School
Copper Country players are well represented on the Michigan High School Coaches Association All-State Team for Division Three. Among forwards, Brent Loukus and Rory Anderson of Calumet, Jacob Kruse from Houghton and Alex Nordstrom from Hancock were named to the first team. Hancock’s Teddy Randell and Houghton’s Dawson McKay were named to the second team, and Calumet’s Ed Beiring received Honorable Mention votes. Among defensemen, Trevor Johnson of Calumet was placed on the first team, and Tanner Givens of Hancock, Jack Sturos of Calumet and Kevin Bostwick of Houghton were named to the second team. Hancock’s Dawson Kero was one of three goalies named to the first team. Calumet’s Nick Voelker received Honorable Mention votes. See the entire list here.

Boys basketball regional semifinal games will be played tonight…
– In Class C, Calumet faces Negaunee at Escanaba at 7:30. Our pregame coverage will begin around 7:10 on KBear 102.3 and KBear102.com.
– In Class D, Dollar Bay-Tamarack City takes on two-time defending state champion North Central at 8:00 at Negaunee.

MTU
Gavin Gould’s hat trick led the Michigan Tech hockey team to a 4-1 victory over Minnesota State last night, and a berth in the Western Collegiate Hockey Association championship game. Gould opened the scoring in the first period. He scored the game-winner and an insurance goal in the second. Chris Liebinger added an empty-netter late in the game. Angus Redmond stopped 20 shots. After winning the semifinal series two games to one, the second-seeded Huskies will host fourth-seeded Bowling Green in the title game Saturday. The Falcons upset top seed Bemidji State, sweeping the Beavers 4-3 in overtime Friday, and 2-1 Saturday. The championship match will start at 7:07. The winner will claim the Broadmoor Trophy, and the WCHA’s automatic berth in the NCAA tournament.

NHL
The Detroit Red Wings lost 4-1 to the New York Rangers last night. The Wings will skate at Colorado on Wednesday.

MLB
The Detroit Tigers broke their nine-game spring losing streak yesterday with a 4-3 victory over the New York Mets. Mike Pelfrey pitched three scoreless innings in relief, and earned the win. The Tigers will face the Washington Nationals this afternoon.

The Milwaukee Brewers lost to the Cincinnati Reds 4-2 yesterday. Jimmy Nelson tuned in three scoreless innings. The Brewers will face the Seattle Mariners this afternoon.

A Toivola native has been killed while fighting a wildfire in Oregon. Officials with the …