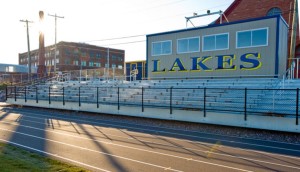 In high school football Saturday, Lake Linden-Hubbell took advantage of good field position and several critical Bark River-Harris mistakes, and rolled into the playoffs with a 40-16  homecoming victory. The Lakes opened the scoring with 3:20 remaining in the first quarter, as Brandon Middleton raced into the end zone from 16 yards out. The two-point conversion failed. After a Middleton interception, Peter Heikkinen booted  field goal to increase the margin to 9-0 early in the second quarter. Bark River Harris’ next drive also ended with a Middleton interception, and he capped the ensuing drive with a 21-yard touchdown run. The Broncos earned some yardage on the following drive, but penalties forced a fourth-and-long play in Lake Linden territory. Aaron Heinault knocked down a pass at the goal line to force the possession change, then raced 77 yards on the Lakes’ first play for a score. Bark River quarterback Jace Briggs put the Broncos on the board with a six-yard run shortly before halftime, to make the score 25-8 at the break. The Lakes found the end zone again with 4:04 remaining in the third quarter on a 30-yard run by Steve Suhonen. Quarterback Carter Crouch finished the Lakes’ scoring with a one-yard plunge early in thee fourth quarter. The Broncos tacked on a late score when Iver Stenberg scored with 3:08 remaining.

With their sixth win, the unbeaten Lakes become the first Copper Country team to clinch a playoff berth, and they remain in first place in the Mid-Eastern Conference.

The result of Ewen-Trout Creek’ game against Pickford was not reported.

MTU
Marvin White’s 102-yard kickoff return for a touchdown lifted Saginaw Valley State to a 17-16 victory over Michigan Tech at the Huskies’ homecoming game Saturday. The sudden score came with four minutes remaining, and just after Tech kicker Josh King had connected on a 29-yard field goal to extend the Huskies’ lead to 16-10. MTU had taken a 6-0 lead in the first quarter on a Kevin Miller touchdown run. The extra point kick was blocked. They increased the margin to 13-3 early in the fourth quarter, when quarterback Brandon Cowie found fullback Alex Sherbinow in the end zone. The Cardinals closed the gap with an 82-yard touchdown pass, and then stunned the crowd and won the game with White’s kickoff return.

The MTU soccer team hosts Ohio Dominican today at noon in the “Let’s Kick Cancer” game. The Huskies are partnering with the Women Living with Cancer Support Group. Each player will wear a warm up t-shirt that is available for bid online. Bids can be placed now at the team’s Facebook page.

The 17th-ranked Tech hockey team opened its season with a 6-0 loss at Minnesota-Duluth Saturday night. Matt Wintjes started in net, and gave up four goals while stopping 11 shots. Devin Kero replaced him midway through the game, and allowed two goals while turning away 10 shots. Those two teams play in Duluth again this evening.

The Finlandia football team had the weekend off.

MLB
The Detroit Tigers’ playoff hopes hang by a thread, after they fell to the Atlanta Braves 5-3 Saturday night. Starter Jordan Zimmermann opened the game with three shutout innings, but left after giving up a two-run homer in the fourth. Alex Wilson gave up a run in the sixth, and the Braves put the game away with two runs off Shane Greene in the seventh.

Toronto won, and Baltimore lost Saturday. Those two teams are tied for the two American League wild card playoff berths. The Tigers are a game-and-a-half back. For Detroit to claim a wild card berth, they must win today. If they lose today, under any circumstances, their season is over. If both the Orioles and Blue Jays win today, Detroit’ season is over, whether the Tigers win or lose. If the Tigers win, and either the Orioles or Blue Jays (or both) lose, that would put the Tigers a half-game out, and require them to make up Thursday’s rained-out game against the Cleveland Indians. If needed, that game will be played on Monday afternoon in Detroit.

Justin Verlander will start the first of those must-win games this afternoon, as the Tigers wrap up their series at Atlanta. Julio Teheran will counter for the Braves. Hear the first pitch at 3:10 on AM 1400 and FM 99.3, WCCY.

Chris Carter’s home run in the top of the 10th inning powered the Milwaukee Brewers to a 4-3 victory over the Colorado Rockies on Saturday.  It was Carter’s 41st home run of the season, and it tied him with Nolan Arenado of the Rockies for the National League lead.

The Brewers wrap up their season at Colorado this afternoon. Tyler Cravy will pitch against German Marquez. It could be Ryan Braun’s final game in a Milwaukee uniform. He’s a free agent, and is expected to draw interest from several teams.

The Detroit Lions visit the Chicago Bears for a 1:00 kickoff this afternoon. The Lions will be without injured defensive end Ezekiel Ansah and linebacker DeAndre Levy. Bears’ quarterback Jay Cutler is among five Chicago players listed as doubtful. Check the latest injury report here.

The Green Bay Packers have the weekend off.

NHL
The Detroit Red Wings will host the Chicago Blackhawks in a preseason game this evening. Listen for regular-season Red Wings’ games on AM 1400 and FM 99.3, WCCY.

Our high school football playoff coverage continues Friday night, as Calumet entertains L’Anse. The Copper Kings would clinch a playoff berth with a win. The pregame show will start around 6:40 on KBear 102.3 and KBear102.com.