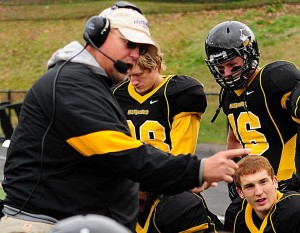 Michigan Tech football coach Tom Kearly today announced that Steve Olson has been promoted to defensive coordinator, replacing Tim Driscoll who left to become the head coach at Finlandia. Olson has been on the Huskies’ staff as the linebackers coach since 2011.A 23-year coaching veteran, Olson has had stints at both Minnesota Crookston and Jamestown College (N.D.). He spent 12 years at Crookston in various roles with the defense including defensive coordinator.“Promoting Steve will make for an easy transition,” said Kearly. “He’s a really good coach who’s already been a coordinator at the Division II level. He’s coordinated our defensive front for the last three years, and I know he’ll do a great job leading our defense.”Olson helped Tech lead the GLIAC in pass defense (176.9 yards per game) in 2013. The Huskies also ranked second in total defense (363.6 yards per game). Tech finished second in the GLIAC in rushing defense in 2012, allowing just 118 yards per game. He also coached All-GLIAC First Team linebacker Justin Armstrong.With Olson moving to the defensive coordinator role, two others were promoted within the staff. Bryan Thomas, who has served in a graduate assistant and part time role for the past four seasons, will now be the defensive line coach and special teams coordinator. Josh Wood, who has been a graduate assistant for the past three seasons, will continue working with the secondary in a full-time role.“Bryan has been a part of our staff for four years and was an easy choice for a full-time position,” said Kearly. “He played defensive line at Grand Valley and has worked with the offensive line and tight ends here, giving him a good feel for what he’s coaching against.“Josh has already spent three years with our secondary. He’s regarded highly by our players, and the ability to bump him up to full time really helps us.”Michigan Tech opens preseason practice Aug. 14 in preparation for its Sept. 4 season-opener at Wayne State.

Click on the highlighted scores for more game details. High School In volleyball this evening… …